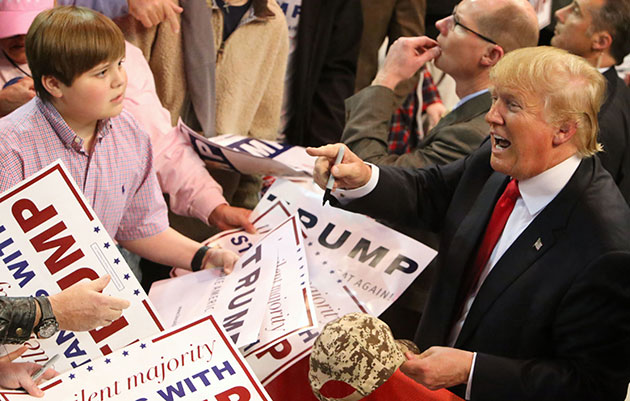 Five-time Jeopardy! champion Tom Nichols1 writes today about why so many people are attracted to Donald Trump. Nichols is a Republican,2 but he makes it very clear that he deeply loathes Trump (“hideous,” “narcissistic,” “creepy,” “stupid,” etc.) and will never vote for him. So what’s his take on Trump’s popularity? Is it due to economic insecurity? Inchoate anger? Bubbling racism and xenophobia? Hatred of the Republican establishment?

Nah. He says Trump’s rise is basically the fault of the left:

To understand Trump’s seemingly effortless seizure of the public spotlight, forget about programs, and instead zero in on the one complaint that seems to unite all of the disparate angry factions gravitating to him: political correctness. This, more than anything, is how the left created Trump

Uh-oh. That’s not going to go over well. For what it’s worth, Nichols is clear that he isn’t referring to garden variety political correctness, which is basically little more than avoiding terms that are obviously insulting or exclusionary. At worst, that stuff is annoying but well-meaning:

Today, however, we have a new, more virulent political correctness that terrorizes both liberals and conservatives, old-line Democrats and Republicans, alike…The extremist adherents of this new political correctness have essentially taken a flamethrower to the public space and annihilated its 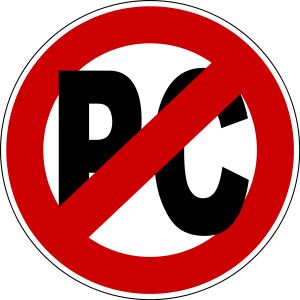 center…Any incorrect position, any expression of the Constitutional right to a different opinion, or even just a slip of the tongue can lead to public ostracism and the loss of a job.

…Gay marriage is a good example. Liberals wanted gay marriage to win in the Supreme Court, and it did. Leftists wanted more: to silence their opponents even after those opponents completely lost on the issue…I could reel off many other examples. When the New York Times tells the rubes that it’s time to hand in their guns, when The Washington Post suggests that Jesus is ashamed of them for not welcoming Syrian refugees the week after a terrorist attack, people react not because they love guns or hate Syrians, but because their natural urge to being told by coastal liberals that they’re awful people and that they should just obey and shut up is to issue a certain Anglo-Saxon verb and pronoun combination with all the vigor they can muster. And if they can’t say it themselves, they’ll find someone who will, even if it’s a crude jerk from Queens who can’t make a point without raising his pinky like a Mafia goon explaining the vig to you after you’ve had a bad day at the track.

…For the record, I despise Donald Trump and I will vote for almost any Republican (well, okay, not Ben Carson) rather than Trump….But I understand the fear of being silenced that’s prompting otherwise decent people to make common cause with racists and modern Know-Nothings, and I blame the American left for creating that fear.

…How long this will go on, then, depends on how long it will take for those people to feel reassured that someone besides Trump will represent their concerns without backing down in the face of catcalls about racism, sexism, LGBTQ-phobia, Islamophobia, or any other number of labels deployed mostly to extinguish their dissent.

This is hardly a new critique. Conservatives have been complaining about “being silenced” forever. The only difference between Trump and the rest of the GOP field is that Trump’s complaints are a little earthier than Rubio’s or Bush’s.

Still, even if I think Nichols is overstating things, it’s not as if he doesn’t have a point. Even those of us on the left feel the wrath of the leftier-than-thou brigade from time to time. I don’t generally have a hard time avoiding objectionable language myself because (a) I’m liberal, (b) I’m good with words, and (c) I write rather than talk, which gives me time to get my act together. But even at that, sometimes I cross an invisible line and get trounced for it.

But for someone without my advantages, I can easily see how it might feel almost impossible to express an unpopular opinion without tying yourself in knots. And let’s be honest: We liberals do tend to yell racism a little more often than we should. And we do tend to suggest that anyone who likes guns or Jesus is a rube. And the whole “privilege” thing sure does get tiresome sometimes. And we do get a little pedantic in our insistence that no conversation about anything is complete unless it specifically acknowledges the special problems of marginalized groups. It can be pretty suffocating at times.

For the most part, I don’t mind this stuff—and conservatives do themselves no favors by harping on supposed PC idiocy like the “war on Christmas.” But the reason I don’t mind it is that I can navigate it reasonably well4 and I mostly agree with the aims of the PC police anyway. People who have trouble with navigation obviously feel a lot more constrained. So while I don’t really buy Nichols’ argument—conservatives built the monster named Trump, not liberals—I do think he has a germ of a point. Donald Trump is basically telling ordinary people that ordinary language is okay, and since that’s the only language they know, it means they feel like they can finally talk again.

1Okay, fine: He’s also a professor of national security affairs at the US Naval War College.

2Former Republican, anyway: “I’m a conservative independent and a former Republican. I quit the party in 2012 because of exactly the kind of coarse ignorance that Trump represents. The night Newt Gingrich won the South Carolina primary on the thoughtful platform of colonizing the moon, I was out.”3

3 I included that second sentence only because it tickled me.

4 Much of this I’ve learned from reading stuff by academics, who are the masters of acceptable language. As an example: If you were to call something “black behavior,” you’d probably get mauled. The solution? Call it “behavior stereotypically coded as black.” This accomplishes so many things at once. However, it’s also phraseology that no ordinary person would ever think of. This means they literally have no acceptable way of expressing the original thought, which makes them feel silenced.