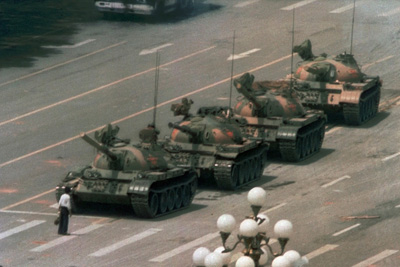 Here is Donald Trump in a 1990 Playboy interview:

What does all this—the yacht, the bronze tower, the casinos—really mean to you?
Props for the show.

And what is the show?
The show is “Trump” and it has sold out performances everywhere. I’ve had fun doing it and will continue to have fun, and I think most people enjoy it.

….What were your [] impressions of the Soviet Union?
I was very unimpressed….Russia is out of control and the leadership knows it. That’s my problem with Gorbachev. Not a firm enough hand.

You mean firm hand as in China?
When the students poured into Tiananmen Square, the Chinese government almost blew it. Then they were vicious, they were horrible, but they put it down with strength. That shows you the power of strength. Our country is right now perceived as weak … as being spit on by the rest of the world—

So after eight years of Ronald Reagan, within weeks of the fall of the Berlin Wall, Trump is convinced that America is perceived as weak. I guess in Trumpland, America is always weak. Too bad we’re not more like the Chinese at Tiananmen Square. Sure, they almost blew it, but in the end they did what they had to do. I guess they would have known what to do with those Occupy hippies and all the Mexicans flooding into the country too.