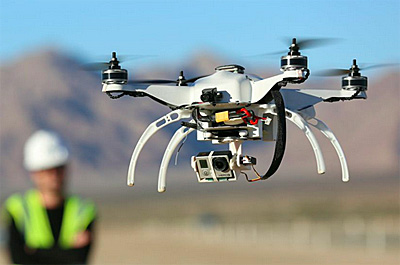 I keep coming back to this story in the Washington Post today:

William Merideth had just finished grilling dinner for his family when he saw a drone hovering over his land. So he did what he said any Kentuckian might do — he grabbed his Benelli M1 Super 90 shotgun, took aim and unleashed three rounds of birdshot. “The only people I’ve heard anything negative from are liberals that don’t want us having guns and people who own drones,” said the truck company owner, now a self-described “drone slayer.” Downing the quadcopter, which had a camera, was a way to assert his right to privacy and property, he said.

My initial reaction: hooray for Merideth! A nice dinner of buckshot seems about right for a drone hanging around my backyard.

On further thought, this may seem excessive. Dangerous, too, especially if you live in a suburb or a city. The owner of the drone in question says it was 200 feet up, and really, who cares if someone is watching you from 200 feet up? But this is what gives me pause:

“There is gray area in terms of how far your property rights extend,” said Jeramie Scott, national security counsel at the Electronic Privacy Information Center….According to the Federal Aviation Administration, every inch above the tip of your grass blades is the government’s jurisdiction. “The FAA is responsible for the safety and management of U.S. airspace from the ground up,” said an agency spokesman, echoing rules laid out on its website.

If this is really true, then a drone could fly right into my backyard and hover around looking for anything it wants. Thieves could keep a close eye out to see when houses are empty. Peeping Toms could be staring through our second-story windows. Busybodies could film you at night while you were disposing of bodies in your backyard.

I don’t know what the answer to this whole drone revolution is. All I can say is that I’m not on board with the laissez faire idea of just letting ’em rip and then deciding later what we want to do. There are too many dangers that are already obvious, and will plainly become even more pressing as the drone population grows from the millions to the billions. Especially in the case of hobbyist drones, there’s really no compelling interest for non-regulation except that they’re having fun and don’t want anyone to spoil their party. I don’t find that especially persuasive. I’d really like to see some tightening of the rules for using drones sooner rather than later, especially in populated areas. We can ease up later if it seems wise.