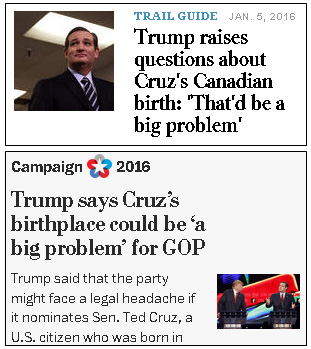 Stop it, stop it, stop it, STOP IT! Just because Donald Trump says something calculatingly stupid and provocative doesn’t mean it has to be reported as front-page news. Everyone knows that his “Cruz is a Canadian” thing is ridiculous—and he wouldn’t bother saying it if he didn’t know that it was going to get loudly amplified by a media that just can’t say no to him.

Look: he’s a candidate. He’s in the lead. Reporters have to report what he’s doing. I get it. But stuff like this is such obvious media bait that it should be treated as such. It should get one line at the end of the day’s campaign roundup: “In other news, Donald Trump tried to gain attention once again with a goofy claim that Ted Cruz might not be a natural born citizen.” That’s all it really needs.