Oh come on. A front-page piece about the fact that Donald Trump is airing a TV ad? Seriously? And the article itself is even worse:

The Republican presidential candidate’s long-awaited and hotly anticipated first ad, which was shared exclusively with The Washington Post, is set to launch Monday as part of a series that will air in the final month before the Iowa caucuses. Trump has vowed to spend at least $2 million a week on the ads — an amount that will be amplified by the countless times they are likely to be played on cable news and across social media.

Would the Post do this for any other candidate doing something as routine as airing an ad? Has it really been long-awaited? Or hotly anticipated? And shouldn’t that last line say “cable news and print media offered ‘exclusive’ looks”?

I know it’s tedious to complain about the mainstream media going gaga over everything Donald Trump says, but WTF? It’s an ad. There’s nothing special about it. It’s just a narrator saying the same stuff Trump has been saying forever. It’s not raising the temperature of anything. So why not just write a short blog post about it and move on?

In other news, apparently there’s a crazy woman who’s been following Hillary Clinton around for years in order to harangue her about Bill’s alleged sexual misconduct. She did it again today. In other words, this is practically the definition of “not news.” So why is it news at the Post?

The allegations of misconduct that have swirled around the former president for years have reemerged in the campaign recently, thanks to GOP businessman Donald Trump, who has said that those allegations are fair game on the campaign trail.

So there you have it. If Donald Trump writes a bunch of tweets about dogs biting men, then it’s news. Crikey. And as long as we’re on the subject, here is Trump once again selling 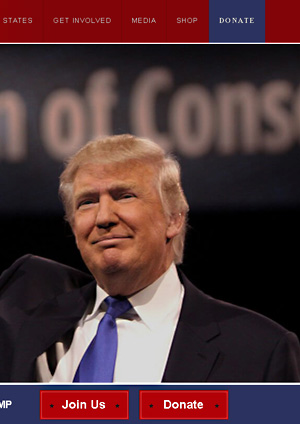 the myth that he’s self-funding his campaign:

Uh huh. Except, of course, for the fact that “Donate” buttons are the main things highlighted at the top of Trump’s web page. And if you click one of them, the donation page asks for contributions from $10 to $2,700. And that’s actually Trump’s main source of funding, not his own pocket. But sure. Other than that, he’s totally self-funded and he’s not asking for anything.

I’m curious: Is Donald Trump even capable of opening his mouth without saying something untrue?