Caroline Framke argues that the #OscarsSoWhite movement is targeting the wrong part of Hollywood:

Ever since the Oscar nominations were announced and it became clear that talk of supporting diversity did not translate into tangible recognition, white actors have contributed astonishingly tone-deaf thoughts in droves….But even as these actors make gaffes about the lack of racial diversity in Hollywood, there are countless producers, agents, directors, and executives who aren’t getting the same kind of grilling — and they’re the ones who most stand a chance of making real change.

….The lion’s share of real power in Hollywood lies with its behind-the-scenes players. Producers, agents, and directors rarely have the glossy profiles, red carpet looks, or motivation to keep us interested in their 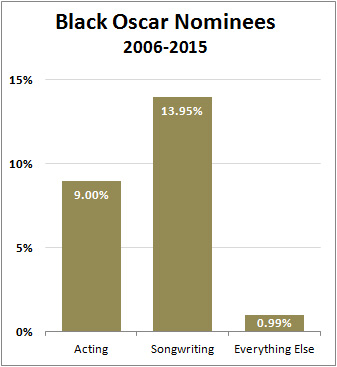 day-to-day lives. Thus, they can operate in a publicity vacuum more than those making a living onscreen. When something like #OscarsSoWhite breaks, they’re usually not the ones sitting on folding chairs at press junkets and putting their words on the record.

Framke is right, but you don’t even need to stray this far to make her point. The chart on the right tells you everything you need to know. As I mentioned the other day, the acting categories at the Academy Awards are actually pretty diverse: the number of black nominees has gone up steadily and reached 9 percent during the last decade. That’s not bad. The songwriting category is even better: 14 percent of all nominees have been black over the past decade.

But everywhere else it’s a wasteland: less than 1 percent of all nominees in every other category combined have been black.1 If I bothered looking through the technical awards, the percentage would be even lower.

This is hardly a big Hollywood secret. And it makes Framke even more right: we should leave the actors alone. Hollywood actually does a decent job of making sure the face of the industry is fairly diverse. But dig an inch below the surface and black faces are all but nonexistent.

1I didn’t include two categories: Best Picture, because the winner is usually a team of producers; and Best Foreign Language Film, since by definition none of the winners are African-American. For the record, five African-Americans have been nominated as part of a group for Best Picture over the past decade.