A few days ago, someone asked Bernie Sanders if he supported the payment of reparations to African-Americans. He said he didn’t—and then, as with every other subject he’s asked about, used it as a springboard to talk about the “real issue” of poverty and income inequality. Ta-Nehisi Coates was pretty unimpressed:

Sanders says the chance of getting reparations through Congress is “nil,” a correct observation which could just as well apply to much of the Vermont senator’s own platform….Sanders is a lot of things, many of them good. But he is not the candidate of moderation and unification, so much as the candidate 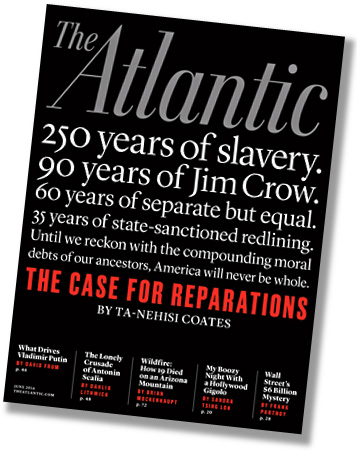 of partisanship and radicalism….Sanders should be directly confronted and asked why his political imagination is so active against plutocracy, but so limited against white supremacy.

Coates is unhappy that Sanders is so reticent about reparations, but this strikes me as an odd criticism. A couple of years ago Coates famously wrote an Atlantic article titled “The Case for Reparations,” and after reading it I concluded that he was reticent about reparations too. He certainly made the case that black labor and wealth had been plundered by whites for centuries—something that few people deny anymore—but when it came time to talk about concrete restitution for this, he tap danced gingerly. Here are the relevant paragraphs:

Broach the topic of reparations today and a barrage of questions inevitably follows: Who will be paid? How much will they be paid? Who will pay? But if the practicalities, not the justice, of reparations are the true sticking point, there has for some time been the beginnings of a solution. For the past 25 years, Congressman John Conyers Jr., who represents the Detroit area, has marked every session of Congress by introducing a bill calling for a congressional study of slavery and its lingering effects as well as recommendations for “appropriate remedies.”

….Scholars have long discussed methods by which America might make reparations to those on whose labor and exclusion the country was built. In the 1970s, the Yale Law professor Boris Bittker argued…$34 billion….Today Charles Ogletree, the Harvard Law School professor, argues for something broader: a program of job training and public works that takes racial justice as its mission but includes the poor of all races.

….Reparations—by which I mean the full acceptance of our collective biography and its consequences—is the price we must pay to see ourselves squarely….What is needed is an airing of family secrets, a settling with old ghosts. What is needed is a healing of the American psyche and the banishment of white guilt.

If you say “reparations,” an ordinary person will almost certainly understand it in a very specific way: A disbursement of money to blacks to atone for slavery and its aftermath. But despite the provocative title of his piece, Coates never squarely endorses this. Instead, he suggests we pass a bill that would study slavery. He writes approvingly of Ogletree’s proposal for job training and public works. And he wants a “full acceptance” of our past along with a “national reckoning” about its consequences.

I’m not being coy when I say that after I read this, I couldn’t tell whether or not Coates supported reparations in the sense that most people understand them. And since I’m sure that’s the sense in which Bernie Sanders was answering the question, I’m not quite sure what Coates is criticizing here. To my ear, Sanders sounded a lot like Ogletree, who Coates seems to have no problem with. So what’s his problem with Sanders?

POSTSCRIPT: Since someone is bound to ask, I don’t support reparations myself because I don’t think they would do any good. But maybe I’m wrong. I can be convinced otherwise.

And if I am wrong, I’ve never thought that practical considerations are an insurmountable obstacle. A simple solution is to try to roughly equalize black and white net worth, which would require payment of about $50,000 to every black person in the country. That would be expensive but affordable over a course of 10 or 20 years. Nor would the supposedly sticky subject of “who’s black?” be all that difficult. About 95 percent of the cases would be easy, and the rest would go to an arbitration panel of some kind. The arbitration might be messy, but it would hardly be the first time we’ve done something like this.