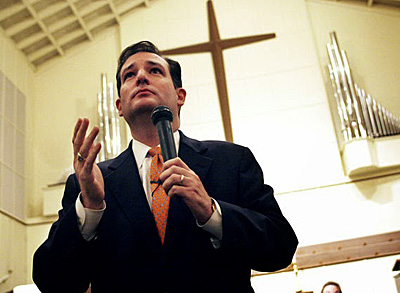 McKay Coppins tells us that Ted Cruz is “facing questions” about his lack of entirely Christ-like generosity:

In a series of interviews this week, political opponents and pastors alike suggested Cruz — an avowed Baptist who is aggressively courting evangelical voters — has flouted the Biblical commandment of tithing in his personal life….According to personal tax returns released during his 2012 Senate bid, Cruz contributed less than 1% of his income to charity between 2006 and 2010 — a far cry from the 10% most evangelical leaders believe the Bible demands.

Well, Ted had all those loans from Goldman Sachs to pay off, so he probably didn’t have much to spare for tithing. Anyway, those loans were used for the greatest possible gift to the Lord: Ted Cruz’s ascension to the Senate.

Of course, Cruz is Mother Teresa compared to his competition:

Tax filings of the Donald J. Trump foundation show Trump has made no charitable contributions to his own namesake nonprofit since 2008. Without an endowment, the fund has continued to give grants only as a result of contributions from others.

….Pressed by the AP on the details of his contributions, Trump campaign spokeswoman Hope Hicks provided a partial list of donations that appeared to correspond with the foundation’s gifts — indicating that Trump may be counting other people’s charitable giving as his own.

“I give to hundreds of charities and people in need of help,” Trump said in an emailed response to questions from the AP about how he tallied his own philanthropy. “It is one of the things I most like doing and one of the great reasons to have made a lot of money.” The Trump campaign did not respond to a request that it identify donations that Trump himself gave.

More here. Obviously Trump is lying about this, but that’s hardly even noteworthy anymore. As near as I can tell, he’s congenitally unable to tell the truth about anything related to his finances. I mean, this is a guy who’s using other people’s money for his supposedly self-funded campaign and who claims to this day that he did great with his Atlantic City casinos.

But he’s somehow invulnerable anyway. As best I can figure it, Trump (a) never goes to church, (b) has never read the Bible, (c) is unusually stingy, and (d) lives a personal life of serial affairs with younger women followed by serial divorces. But somehow lots of evangelicals think he’s a Godly man anyway.

Cruz, on the other hand, is the son of a guy who runs the Purifying Fire International ministry—a preacher so evangelical he seems ready to explode at times. Cruz went to a Baptist high school; he talks about religion interminably; and he attends church regularly. But somehow lots of evangelicals have abandoned him for Trump.