The Wall Street Journal has an interesting look today at the costs and benefits of immigration across the Southern border. After Arizona cracked down on illegal immigration in 2007, their population of undocumented workers dropped by a whopping 40 percent—and it’s stayed down since then:

Arizona is a test case of what happens to an economy when such migrants leave, and it illustrates the economic tensions fueling the immigration debate.

Economists of opposing political views agree the state’s economy took a hit when large numbers of illegal immigrants left for Mexico and other border states, following a broad crackdown. But they also say the reduced competition for low-skilled jobs was a boon for some native-born construction and agricultural workers who got jobs or raises, and that the departures also saved the state money on education and health care. Whether those gains are worth the economic pain is the crux of the debate.

You should read the whole thing if you want all the details, including the fact that wages increased about 15 percent for a small number of construction workers and farmworkers—though Arizona’s unemployment rate more generally has been no better than its neighbors’. Beyond that, though, the Journal provides only a graphic summary that doesn’t really summarize much. So I’ve helpfully annotated it for you. It sure looks to me like Arizona has a very long way to go before the benefits of reducing illegal immigration will come anywhere close to the costs. 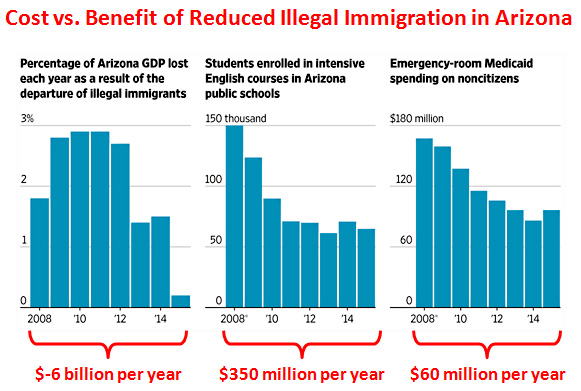