States preside over the great bulk of the US justice system. So it’s actually state policies that fueled mass incarceration….Federal criminal justice policy, including much of the 1994 crime law, focuses almost entirely on the federal system, particularly federal prisons….In the US, federal prisons house only about 13 percent of the overall prison population.

That’s true. And there’s one other thing to add to that: by 1995, when the crime bill took effect, state and federal policies had long since been committed to mass incarceration. Between 1978 and 1995 the prison population had already increased by more than 250 percent. Between 1995 and its peak in 2009, it increased only another 40 percent—and even that was due almost entirely to policies already in place. 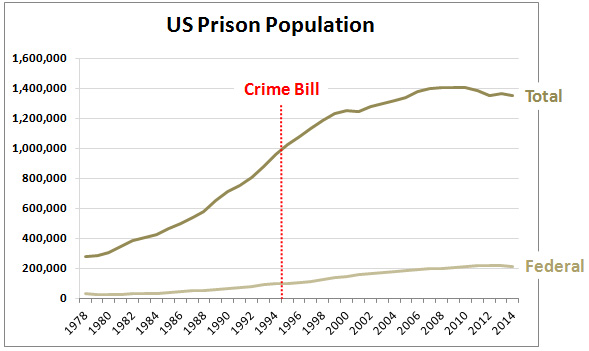 Depending on your reading of history, mass incarceration was either (a) a reasonable response to a huge crime wave, (b) a defensible idea that got way out of hand, or (c) a racist scourge that destroyed the black community. In fact, there’s a good case that it was all three of these things: there really was a big surge in crime in the 70s and 80s that created a growing pool of violent offenders; even the defenders of mass incarceration mostly agree that it had already gone too far by the early 90s; and it’s difficult to believe that it ever would have gone as far as it did if it weren’t for the contemporary media-political inspired hysteria over black “predators” flooding our neighborhoods.

That said, whatever else the 1994 crime bill did, it didn’t create the carceral state or even give it much of a boost. That had happened many years before.