Joe Scarborough takes to the pages of the Washington Post today to condemn Donald Trump’s refusal to denounce the KKK:

Sunday’s distressing performance is just the latest in a string of incidents that suggest to critics that Donald Trump is using bigotry to fuel his controversial campaign. The most explicit of all examples was his December proposal to ban Muslims from entering the United States.

….A brokered convention is now just the fantasy of Republican elites and Marco Rubio fans. The harsher reality is that the next GOP nominee will be a man who refused to condemn the Ku Klux Klan and one of its most 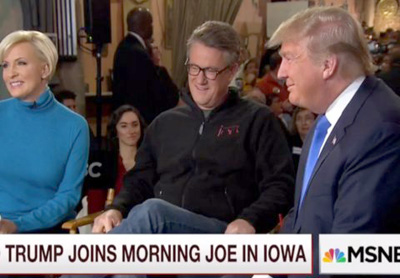 infamous Grand Wizards when telling the ugly truth wouldn’t have cost him a single vote.

So is this how the party of Abraham Lincoln dies?

Scarborough has probably done more than any other single human being to help Trump get where he is. And he’s only now noticing that Trump’s bigoted rhetoric has turned out to be pretty popular among the Republican base? “It looks like I overestimated primary voters in the early GOP contests,” he tsk tsks, as if he’s been on a crusade for months to warn the nation that Trump is a racist and a xenophobe, only to be sadly ignored. The reality, of course, is that aside from a brief spat with Trump over his proposed ban on Muslims, Scarborough has been practically a one-man super-PAC pushing Trump’s candidacy.

Better late than never for his eyes to finally open, I guess. But it’s a little rich to pretend he’s been warning us about this all along.