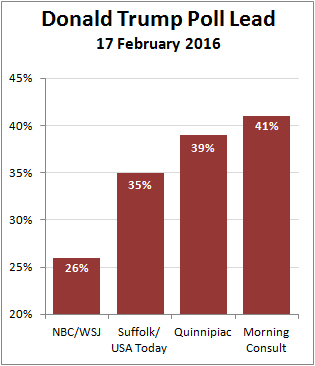 The big campaign news of the day is a new NBC/Wall Street Journal poll showing that Ted Cruz leads Donald Trump nationally, 28-26 percent. But this seems unlikely: Four new national polls have been released since yesterday, and three of them continue to show Trump with about 38 percent support compared to 17 percent for Cruz.

So what’s going on with the NBC poll? If it’s an outlier, it’s a hell of an outlier. I couldn’t even find a table extensive enough to tell me how unlikely it is to be just a sample error. One in a million, maybe? So maybe it’s a problem with NBC’s likely-voter filter? Could be. Or maybe there’s been an enormous negative response to Trump’s debate performance last Saturday? The NBC poll is the only telephone poll done entirely after the debate, so if that were the case it would show up most strongly there.

Very odd. I guess we wait and see.