Of “apparently natural” causes during the night. This is going to set up an unbelievable battle in the Senate. I wonder if Republicans will even 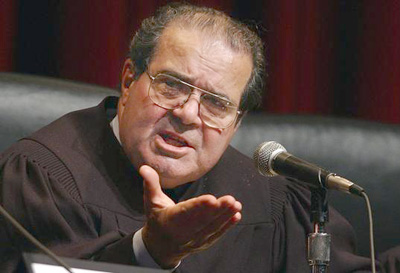 make a pretense of seriously considering whoever President Obama nominates?

In the meantime, the court is split 4-4 between conservatives and liberals. So even if Republicans refuse to confirm a new justice, Obama’s laws and executive orders are safe for another year in any case for which the opinion hasn’t yet been finalized. You can’t overturn an action on a 4-4 vote. This means that EPA’s carbon rules are probably safe. Ditto for Obama’s immigration executive order. Union shops in the public sector are probably safe. Abortion restrictions probably won’t go anywhere. One-person-one-vote is probably safe.

Either way, this is now the most important issue in the presidential campaign. Appointing Supreme Court justices has always been one of the biggest reasons to care about who wins in November, but it’s stayed mostly under the radar until now. No longer. Both sides will go ballistic over this, and the Supreme Court will suddenly seem like the most vital presidential power ever. If you thought things were getting nasty before this, just wait. You ain’t seen nothing yet.

POSTSCRIPT: The last time a justice was confirmed during an election year was Anthony Kennedy in 1988. However, the stakes weren’t as high. He was a conservative replacing a conservative, and didn’t change the balance of the court much. Clarence Thomas was confirmed in late 1991, shortly before an election year, but we all know how that went. Among other things, he was replacing William Brennan, a very liberal justice, and his confirmation changed the balance of the court considerably.

Rick Hasen has more on the political implications of Scalia’s vacant seat here. Ted Cruz has already announced that the Senate should not allow Obama to choose a successor, and Senate majority leader Mitch McConnell agrees. Other Republicans are sure to follow. Fasten your seat belts.