Dean Baker is unimpressed with my argument that US trade deals treat doctors about the same as auto workers because both cars and doctors are required to meet American safety and consumer standards:

The reason that cars overseas meet American standards is because we negotiated a set of standards for them to meet. In other words, that is what our trade negotiators were doing so that they could place U.S. autoworkers in direct competition with low paid workers in Mexico, China and elsewhere.

Our trade negotiators could have been negotiating standards for foreign residency programs. (I know Donald Trump says they are stupid, but they can’t possibly be that stupid.) This would mean that other countries could establish residency programs that ensure that doctors in Germany, Canada, and hopefully many other countries were trained to a level where they were as good as U.S. trained doctors. The reason this didn’t happen is because doctors have much more political power than autoworkers.

Dean is right that foreign doctors face considerable barriers if they want to work in the US. They have to perform their residency in the US, and visa preference is given to doctors willing to practice in “underserved areas”—which tend to be rural and poor. This is especially onerous for experienced 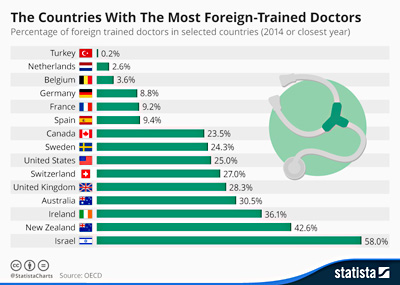 doctors who have been practicing for years but aren’t allowed to practice in the US unless they repeat their 3-year residency here.

That said, about 25 percent of US doctors are educated abroad, and about 15 percent of them are immigrants (the others are US citizens who went to med school overseas, typically in the Caribbean). Take a look at the chart on the right and you’ll see that this is slightly above average for rich countries—largely because other countries have similar requirements. The AMA is indeed well organized and powerful, but somehow foreign doctors manage to come to the US in pretty sizeable numbers anyway.

Or how about another example? A friend writes to say this: “I work in Silicon Valley. Walk into any software development shop, any data center, any IT support shop, any solutions consultancy and try to find somebody who was born in the US, or even has a US passport. If you’re an American coder, you’re going to have to accept much lower wages than you would have unless you’re a real rock star. That’s because we import ’em by the pallet load.” Coders aren’t as well organized as doctors, but they’re still a lot better paid than blue collar auto workers. And yet an awful lot of foreign-born IT workers manage to make it into the country anyway.

In fairness, I think the real problem here is just that Dean chose a bad example. When you’re talking about people rather than goods, you’re going to collide with immigration law, and that makes the comparison apples to oranges. Instead let’s compare goods to services. Think about it this way: for decades we’ve been signing trade deals that lower tariffs on various goods, including cars, and this directly impacts blue collar manufacturing workers. But what did we get in return? Certainly not nothing. In part, the answer is that we negotiated access to overseas financial markets, which benefited traders and executives on Wall Street—a group that’s considerably richer than doctors. This was an extended process, and when the final protocols were approved in 1997 the head of the WTO congratulated everyone involved for the “courage and commitment to pursue the policies of liberalization which are essential to economic stability, growth and development.”

Ahem. That’s not exactly how things worked out. But Wall Street sure got rich in the process!

There’s nothing much left to do on the financial front, so TPP focuses a lot of attention on IP law. This benefits large, patent-heavy corporations and large content providers like Disney. They probably can’t match Wall Street bankers for sheer riches, but they sure make a lot more money than all those poor doctors.

So I still think Dean is wrong to single out doctors, but all he’d have to do is switch comparisons to make his point. A lot of this stuff would probably have happened regardless, but US trade policy sure helped it along. Generally speaking, manufacturing workers suffered while the rich donor class benefited. It’s hardly any wonder that unions and blue-collar workers aren’t very thrilled at continuing this process.