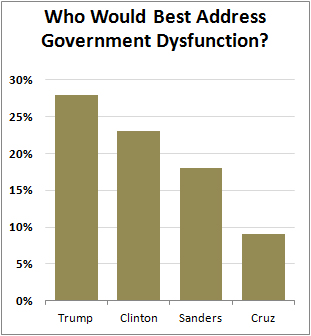 The headline news from today’s Washington Post poll is the astonishing unpopularity of Donald Trump. His net favorable rating is -37 percent: 30 percent like him and 67 percent don’t. The other candidates have net negative ratings too, but nothing close to this.

On another subject, 69 percent of respondents claim to believe that the “current political system” is dysfunctional. I don’t know whether to take that seriously, or just as a generalized gripe about politics. What’s interesting, though, is who would do the most to address this. Trump is the top choice, unsurprisingly, but Hillary Clinton is close behind—which is a bit surprising. It certainly suggests, along with other evidence in this and other polls, that support for Hillary isn’t just strong, but roughly as enthusiastic as it is for anyone else.

On the Republican side, enthusiasm for Trump sure seems to be waning. That hasn’t translated into votes for Cruz or Kasich—not yet, anyway. But it might.