Earlier today I was musing over a tweet from a guy who said his daughter’s friends all loathed Hillary Clinton. Just really, really couldn’t stand her. This is obviously a fairly common sentiment. Bernie Sanders didn’t win 80 percent of the millennial vote in Michigan just because he’s an idealistic liberal. The only way you get to a number like that is against an opponent who’s pretty seriously disliked.

But why? The most obvious reason millennials dislike Hillary so strongly is that they think she’s too slippery. “I feel like Clinton lies a lot,” a college student told PBS a few weeks ago. “She changes her views for every group she speaks to. I can’t trust her.” Quotes like that litter the internet, and in 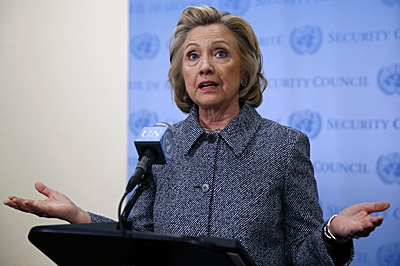 tonight’s debate Karen Tumulty asked about it yet again. “Is there anything in your own actions and the decisions that you yourself have made that would foster this kind of mistrust?”

People of my age find all this a little peculiar. After all, we’re the ones who experienced the full storm of the ’90s. There was a new Hillary “scandal” on practically a monthly basis back then, and even if you later learned there was virtually nothing to any of them, that kind of nonstop mudslinging leaves a mark. It’s hard to hear this stuff over and over and not think that maybe there’s something there. Smoke and fire, you know. But millennials went through none of that. So why do they distrust her?

Unfortunately, Hillary has fostered a lot of this mistrust herself. I’m going to be wildly unfair here and cherry-pick a bunch of quotes from Hillary and Bernie Sanders. First up, here’s Bernie:

There’s no nuance here, no shading. Bernie has simple, crowd-pleasing answers to every question. He’s for X, full stop. He’s against Y, end of story.

At this point I should compare these answers with the more gray-shaded responses Hillary gives on policy questions. But I’m not being fair, so instead you get this:

These are terrible answers. Tonight, Jorge Ramos brought up allegations by the Benghazi families that Hillary had deceived them, and asked, “Secretary Clinton, did you lie to them?” The only answer to this question is “of course not.” But Hillary started by expressing her sympathy for the Benghazi families and only then said of her accuser, “She’s wrong.” Maybe this seems like nitpicking, but it’s not. Unless the very first words out of her mouth are “of course not,” she’s going to leave an immediate impression that she’s about to tap dance around the whole thing. I like Hillary, and even I sighed when she began delivering that answer.

The other quotes are similar. It doesn’t even matter if they’re the truth. They don’t sound like the truth. People my age might forgive Hillary a bit of this lawyerlyness because we remember the ’90s and understand the damage that even a slightly misplaced word can cause. But millennials don’t. They just see another tired establishment pol who never gives a straight answer about anything.

Life isn’t fair. Politics isn’t fair. I think Hillary Clinton is careful, a little bit paranoid, and, ironically, congenitally honest on policy issues. She just can’t bring herself to give simple-minded answers when she knows perfectly well the truth is more complicated. But especially this year, when her competition is a guy like Bernie Sanders, this just makes her look evasive and insincere.

After 40 years in the public eye, I don’t know why Hillary is still so bad at this. But she is. For a long time, liberals mostly forgave her wary speaking style because they were keenly aware of the Republican smear campaign that birthed it. Now, for the first time, there’s a generation of liberals who don’t care about any of that. And an awful lot of them loathe her.