The LA Times reports that millennials still aren’t buying homes the way their parents did:

The last three years of recovery and job growth have raised hopes that millennials, adults under 35 years old, will soon be crowding open houses and kicking the slow-moving home-building industry into higher gear….Trouble is, the housing market itself faces powerful head winds. Changes in demographics and in the industry have held back demand and supply. Neither is likely to be unleashed any time soon.

Surveys by the National Assn. of Home Builders show that less than 20% of new construction in recent years has been for entry-level properties. Before the recession, that share typically hovered around 30%….“This is the first time in the supply history of housing where, for whatever reason, a giant new generation is not being served,” said G.U. Krueger, a Los Angeles housing economist who does research for CalPERS’ advisors and other investors. “To me, it’s incomprehensible.”

This might not be quite as incomprehensible as Krueger thinks. Via Calculated Risk, here’s the Case-Shiller index of housing prices: 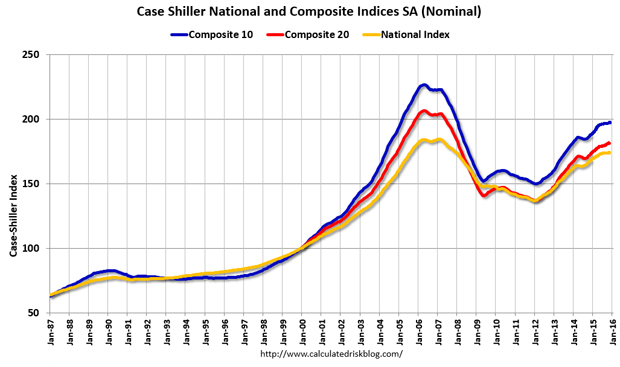 Housing prices haven’t returned to their pre-crash highs, but they’ve recovered quite a bit. Roughly speaking, they’re about 80-100 percent higher than they were in 2000.

In other words, millennial income is down about 10 percent while house prices are up 80-100 percent. Just in the past four years alone, housing prices are up by a third. This makes things a lot more comprehensible: millennials just can’t afford the housing market these days. Unlike boomers and some Xers, they don’t have an existing house that’s appreciated, which helps offset the cost of a new house. Nor do they have faith that housing prices will rise forever, which might tempt them into buying a house even if they had to borrow and scrimp. Millennials who earn more than average will still buy homes, but they have to be farther above the average than in the past, and that means there are fewer of them.

Maybe I’m missing something, but this doesn’t seem all that hard to understand. If I were a home builder, I probably wouldn’t build a lot of starter homes either. There just aren’t that many starters out there who can afford to buy them anymore.