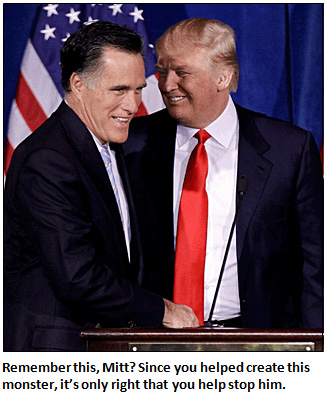 The Washington Post has gotten a copy of Mitt Romney’s exciting anti-Trump speech:

“Donald Trump is a phony, a fraud,” Romney will say, according to a speech prepared for delivery Thursday morning at the University of Utah’s Hinckley Institute of Politics.

“His promises are as worthless as a degree from Trump University. He’s playing the American public for suckers: He gets a free ride to the White House, and all we get is a lousy hat.”…According to Romney’s Thursday remarks, Trump’s “domestic policies would lead to recession. His foreign policies would make America and the world less safe. He has neither the temperament nor the judgement to be president. And his personal qualities would mean that America would cease to be a shining city on a hill.”

Needless to say, Trump’s response is that Romney is a loser. But Romney has the ultimate comeback: “A person so untrustworthy and dishonest as Hillary Clinton must not become president. But a Trump nomination enables her victory.” That argument doesn’t seem to have convinced anyone yet, but I guess it’s worth a try.