When Donald Trump says America is a loser, apparently he’s dead serious. Judging by some of his answers during his interview with the Washington Post editorial board yesterday, he genuinely thinks we’ve all but slipped into third-world status these days. Here he is on American support for NATO: 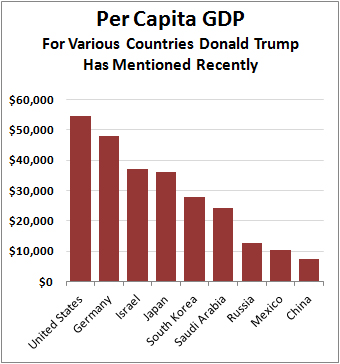 And on Saudi Arabia:

“We’re a poor country now.” I wonder how many people believe that just because Donald Trump keeps saying it? In case anyone cares, the actual truth is in the chart on the right. There’s not a single country in the world bigger than 10 million people that’s as rich as the US.