The Tax Policy Center has analyzed Hillary Clinton’s various tax proposals, which means we now have data for the top three Republican candidates and the top Democractic candidate: Donald Trump, Marco Rubio, Ted Cruz, and Clinton. Click the links for details. Or just look at the charts below for the nickel summary.

On the cost side, all of the supposedly fiscally conservative Republicans would blow a massive hole in the deficit. Clinton would actually make the deficit smaller.

Republicans will claim that their tax plans are designed to supercharge the economy and pay for themselves blah blah blah. This is BS, and they know it. They also claim they’ll slash spending. This is mostly BS too. On the other hand, Clinton says she’ll use the money from her tax plan to fund additional programs, which is entirely believable. This makes her plan deficit neutral. Basically, we have three fantasy plans and one realistic plan. The difference in fiscal responsibility is kind of mind-boggling, isn’t it? 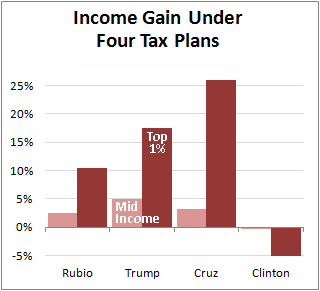 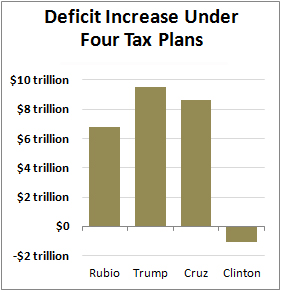