Do you remember Carl Paladino? Sure you do. He’s the wealthy developer and racist jackass who somehow managed to win the Republican nomination for New York governor in 2010 and proceeded to run a campaign drenched in almost fetid ugliness. He hasn’t changed much in the intervening years and he is—unsurprisingly—supporting Donald Trump for president. A few days ago he sent a message to his email list:

We haven’t heard from you following my last memo. The press said I was trying to bully you; obviously that is a misnomer. After all, you are the duly elected representative of your constituents and you know what is best for them. Don’t you?

….This is our last request that you join Trump for President and try to preserve what’s left of your pathetic careers in government. Whatever you do, staying neutral is not an option. Pick a horse in the race and you may salvage some of your constituents’ respect for you. Not choosing paints 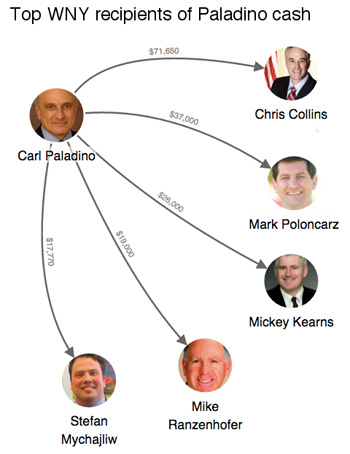 you as a coward. The bus is leaving the station very soon. Get on, or you’ll be left behind.

Charming, no? But typically Paladino. And he promised more to come: “This is the beginning,” he had said of an earlier email blast. It’s going to get worse for those that continue to hold out. I’m being nice. I’ll up the ante a little bit more in the next one I send….People like to read what their representatives are doing.”

Anyway, a couple of weeks before this email went out, Rep. Chris Collins had announced his endorsement of Trump. That was unexpected, since Collins is a moderate guy who had previously endorsed Jeb Bush. Had Paladino threatened to run a challenger against him in the primary, as he’s done with other Republicans he dislikes? The Huffington Post’s Matt Fuller makes the case:

In an interview with The Huffington Post this week, Collins denied he was “pressured” into supporting Trump, saying he endorsed the GOP front-runner without speaking to Paladino about it.

But pressed on whether the two had discussed an endorsement, he backtracked:

Yeah, they know each other. Collins is the biggest recipient of Paladino campaign donations in all of western New York. He certainly knows how generous Paladino can be if he likes you, and how merciless he can be if he doesn’t.