Stanley Kurtz is yet again in a lather about a HUD program called Affirmatively Furthering Fair Housing, the centerpiece of President Obama’s plan to fight housing discrimination:

The Obama administration’s AFFH policy has morphed from “mere” massive regulatory overreach into a bald attempt to quash the freedom of speech of its political opponents. The new federal effort to muzzle Westchester County Executive Robert Astorino’s attacks on the Obama administration’s housing policy is very arguably designed to silence public opposition to AFFH, and to remove a potential political time-bomb from Hillary Clinton’s presidential campaign.

Hillary Clinton’s hometown of Chappaqua, in Westchester County, New York is ground zero in the national controversy over AFFH….And now it just so happens that the “Federal Monitor” appointed to oversee the settlement of a 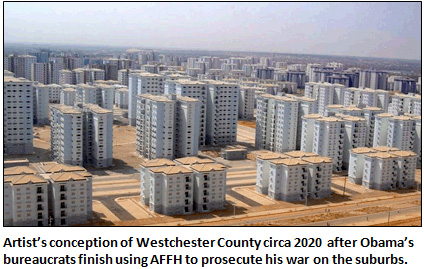 But here’s a funny thing: Westchester’s problems were caused by a private lawsuit filed in 2006, which it lost in February 2009. It hardly seems likely that Obama had much to do with that. And it seems doubly unlikely that AFFH, which was announced a mere nine months ago, could possibly be “ground zero” for a fight that’s been ongoing for over a decade.

Still, I suppose those are nits. Regardless of when it all started, it’s certainly outrageous for the feds to try to gag an opponent of their policies. This is the kind of thing that—

What’s that? Maybe I should take a look at the federal monitor’s actual court filing? How tiresome. But we’re professionals around here. Let’s see now…ah, here it is on page 55: “Recommended Remedies.” This is what the monitor wants:

Basically, Westchester is under court order to do certain things. They haven’t done them. In fact, county leaders have been loudly and habitually lying about both the consent decree and HUD’s affordable housing requirements for years. So now the monitor wants (a) the actual terms of the settlement to be widely distributed, (b) depositions to be unsealed so everyone can see what county leaders have been saying under oath, and (c) a third-party consultant to craft the court-ordered PR plan, since the county plainly has no intention of obeying the consent decree on its own.

But nobody is being muzzled. As near as I can tell, Astorino can continue saying anything he wants. However, the county, in its official capacity as an arm of the government, is required to carry out the consent decree. In the face of repeated intransigence, the federal monitor is asking the court to force it to do just that.

I like reading The Corner. It’s a good place to get a lot of different conservative opinions on the headlines of the day. But there are a few bylines I routinely skip because the authors are basically unhinged. Kurtz is one of them. Among other things, he was part of the crowd that went bananas about Bill Ayers during the 2008 campaign, and he’s been flogging Obama’s “war on the suburbs” for years. Today’s post is just the latest installment.

Anyway: No muzzling. No gagging. No tyranny. Just a county that refuses to obey a court order and a federal monitor who wants a judge to push harder on them. It’s hard to think of anything more routine.