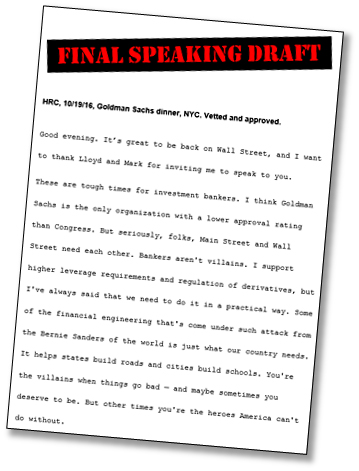 I don’t understand why she can’t put the Goldman, Sachs question behind her. I initially assumed that she either didn’t have transcripts or that what she said was the usual milquetoast stuff politicians offer up. But her continued refusal to provide transcripts (which I now assume must exist) suggests that there must be something damning in them.

For what it’s worth, I think we all know what’s in those transcripts: a bit of routine praise for the yeoman work that investment bankers do to keep the gears of the economy well oiled. Maybe something like this:

These are tough times for investment bankers. I think Goldman Sachs is the only organization with a lower approval rating than Congress [audience laughs politely between bites of prime rib]. But seriously, folks, Main Street and Wall Street need each other. Bankers aren’t villains. I support higher leverage requirements and regulation of derivatives [audience stares moodily at their forks], but I’ve always said that we need to do it in a practical way. Some of the financial engineering that’s come under such attack from the Bernie Sanders of the world [audience brightens] is just what our country needs. It helps states build roads and cities build schools. You’re the villains when things go bad—and maybe sometimes you deserve to be. But other times you’re the heroes America can’t do without.

This is the kind of thing that people say when they give a speech. But in the hands of a political opponent, it will come out like this:

Bankers aren’t villains….The financial engineering that’s come under such attack from the Bernie Sanders of the world is just what our country needs. It helps states build roads and cities build schools….You’re the heroes America can’t do without.

Something like that, anyway. My own guess is that it’s vanishingly unlikely Hillary said anything in these speeches that’s truly a bombshell. Her entire life suggests the kind of caution and experience with leaks that almost certainly 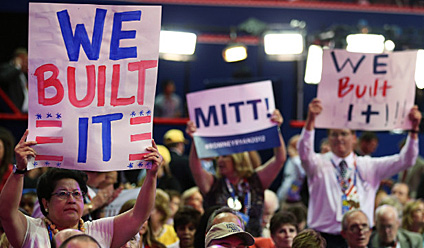 made these speeches dull and predictable. But the Goldman folks knew all that up front. They just wanted the cachet of having a Clinton address their dinner.

Still, when you give speeches to any industry group, you offer up some praise for the vital work they do. It’s just part of the spiel. And Hillary knows perfectly well without even looking that some of that stuff is in these speeches—and it can be taken out of context and made into yet another endless and idiotic Republican meme. Remember “You didn’t build that”? Sure you do.

On another note, if Hillary does release the transcripts, she’s sure not going to do it now. She’ll wait until she has the nomination wrapped up and then release them during the dog days of May or June. If possible, she’ll do it the same day Donald Trump blows up the news cycle again. By that time, Democrats will all be circling the wagons to defend her and the entire foofarah will be dead by the time the real campaign starts in September.

As for the odds of a genuine bombshell, I’d put it at about 1 percent. I guess you never know about these things, but literally everything in Hillary’s 40-year political career suggests a woman who simply doesn’t traffic in bombshells. It’s not in her personality, and in any case, long experience has taught her better. It’s only barely conceivable that something genuinely damning is anywhere in any of those speeches.