Nutritional research is really hard. To do it right, you need a large sample of people; you need to randomly assign them to different diets; they need to actually stick to the diet; and they have to be followed for years. In real life, this is almost impossible.

However, back in the 60s we had different ideas about how we were allowed to treat mental patients, and that led to a large-scale study of cholesterol and saturated fat at a mental institution in Minnesota. Whatever you think of the ethics of an experiment like this, it’s pretty much ideal from a research point of view. The patients can be fed whatever you want; they have no choice but to stick with the diet; and physically they’re fairly typical. So the study got done, and the researchers concluded that a low-fat diet was a good thing.

But it turns out the researchers were pretty dedicated to finding that result in the first place. Recently, the full results of their study were unearthed and analyzed, and it turns out their conclusions were wrong. Totally wrong:

The fuller accounting of the data indicates that the advice is, at best, unsupported by the massive trial. In fact, it appears to show just the opposite: Patients who lowered their cholesterol, presumably because of the special diet, actually suffered more heart-related deaths than those who did not.

The higher rate of mortality for patients on the special diet was most apparent among patients older than 64….“Had this research been published 40 years ago, it might have changed the trajectory of diet-heart research and recommendations” said Daisy Zamora, a researcher at UNC and a lead author of the study. 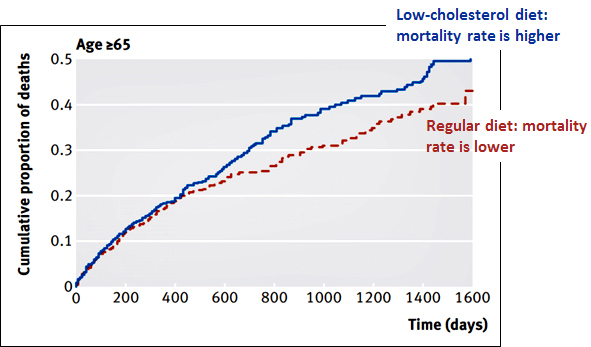 ….“What this research implies is that there is not enough evidence to draw strong conclusions about the health effects of vegetable oils” Christopher Ramsden, a medical investigator at NIH and a lead author of the study, said in an interview.

Ramsden and colleagues discovered the missing data during their research examining the potentially harmful effects of linoleic acid — a key constituent of most vegetable oils — on human health.

Their paper notes that before the advent of agriculture, humans got 2 to 3 percent of their calories from linoleic acid; today most Americans, awash in cooking oils and oils added to snack foods, get much more. Preliminary research suggests a link between linoleic acid and diseases such as chronic pain, Ramsden said.

I’ve mentioned before that I’m semi-convinced that nutritional advice for the past half century has been wildly off base. It’s quite possible that the rise in obesity and other health problems in America is due not to saturated fats, but to our enormous intake of vegetable oil. That, after all, is what’s new in American diets since 1900. Before then, we barely used vegetable oil at all and we were pretty healthy. Now we use it by the tanker car and we’re in pretty sad shape.

To know for sure, we need two things. First, researchers with an open mind. Second, reliable nutritional studies. Unfortunately, since forcing mental patients to be saturated-fat guinea pigs is no longer on the table, it’s as hard as ever to conduct reliable studies. Still, keep in mind that the weakness of nutritional studies works both ways: all the evidence that saturated fats are bad and vegetable oil is good is pretty thin too. Go ahead and smear some butter on that toast.