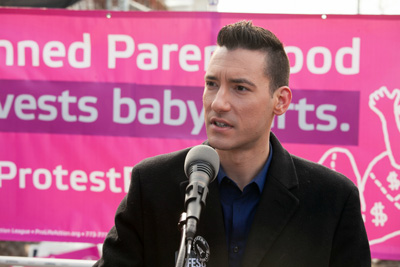 That’s a whole different kettle of fish. A second state is now going after him:

Investigators with the California Department of Justice on Tuesday raided the home of David Daleiden, the anti-abortion activist behind a series of undercover videos targeting Planned Parenthood, the activist said. Authorities seized a laptop and multiple hard drives from his Orange County apartment, Daleiden said in an email. The equipment contained all of the video Daleiden had filmed as part of his 30-month project, “including some very damning footage that has yet to be released to the public,” he said.

Daleiden is now in trouble with both Texas and California. But I suppose it’s all good PR as long as they spell his name right. At this point, Daleiden can probably do better as a martyr for the cause than he can as a straightforward activist. After all, his activism produced squat—except for lots of death threats against abortion providers. But maybe that was the whole plan.