In an embarrassing revelation, the Sacramento Bee reports that UC Davis has spent $175,000 trying to scrub the internet of references to its infamous 2011 pepper spraying incident. So how did that go? Aja Romano says not so well—and there’s a lesson to be learned from this:

As Gawker has been quick to point out, the efforts of both consulting firms failed miserably. As of this morning, “pepper spray” was the second autofill search result I received when I typed “UC Davis” into Google.

In all fairness, while it may suck for UC Davis to be perpetually judged for the actions of one man at an event that took place five years ago, the failure of its efforts to eradicate an unflattering reputation from the web perfectly encapsulates a crucial point about the nature of the internet. More specifically, it speaks to the internet’s ability to dismantle privilege and serve as an essentially egalitarian space where having power doesn’t necessarily mean you can drown out the voices of the many.

There’s a problem here: “As of this morning,” the reason that pepper spraying showed up so widely was because of reports that UC Davis tried to scrub the internet of references to pepper spraying. That put it back in the news. But how about before the SacBee report? I did a Google search that excluded stories about the $175,000 scrubbing effort in an effort to recreate UC Davis’s internet presence as of a few days ago. Here it is: 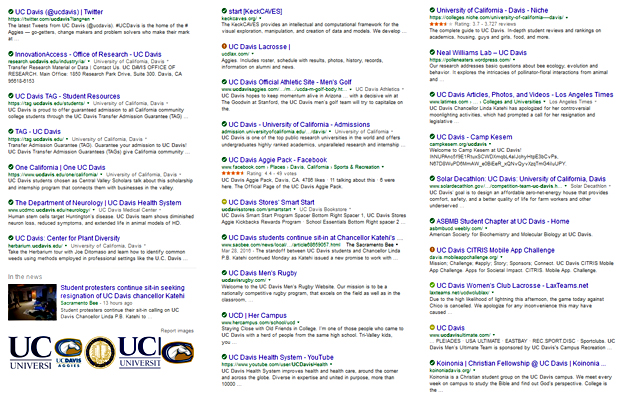 Unless I missed something, the top 50 hits didn’t include a single reference to pepper spraying. Every reference you see in a normal search is there solely because of the SacBee report.

Now, there’s no telling how much of UCD’s success was due to the scrubbing effort, and how much was due to the simple passage of five years. Still, it’s likely that the scrubbing was responsible for at least some of it, and that’s good news for revenge porn victims: the advice they’ve been given really does seem to work. Granted, it’s probably less effective if you don’t have $175,000 to spend on it, so Romano’s point about money having power on the internet is still valid. Nonetheless, it’s still the right basic approach. After all, it sure seems to have worked for UC Davis.