So how are we doing these days? Let’s ask some economists. Their consensus, apparently, is that we’re way better off compared to the golden days of our youth, but not so much compared to more recent years. In fact, economists are split about evenly on whether we’re collectively better off than we were before the financial crash, which seems right to me. Roughly speaking, 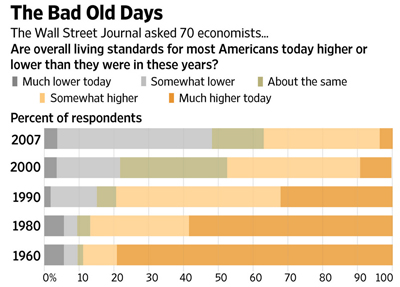 I’d say we’ve recovered to about 2007 levels, but haven’t yet surpassed them.

But this raises a question: Why do so many Americans think they were better off 30 or 40 or 50 years ago? There are several obvious possibilities:

It’s a funny thing about living standards. Take cars. They’re way better on practically every metric you can think of compared to, say, 1960. Cars today are faster, more reliable, more comfortable, more convenient, quieter, smoother, safer, and cheaper. And they come in way more varieties than they used to.

But do people like their cars today more than they did in the 60s? Probably not. We’ve gotten jaded. Cars were still kind of cool to the postwar generation. Today nearly everyone has a car and they’re just another possession. Our automobile living standard is far higher than it used to be, but our automobile happiness probably isn’t.