I’m trying hard to remove my partisan hat and look at this objectively, but I’ll be damned if I can figure out what the problem is supposed to be with this:

The Clinton Global Initiative, which arranges donations to help solve the world’s problems, set up a financial commitment that benefited a for-profit company part-owned by people with ties to the Clintons, including a current and a 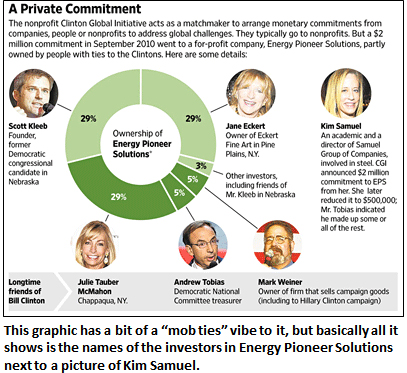 The story meanders through nearly 2,000 more words, but it can be summarized pretty easily:

And…that’s about it. I gather that although this kind of matchmaking is common for the Clinton foundation, it only occasionally involves for-profit companies. But it’s happened before. So what’s the problem? Did Kim Samuel get some kind of benefit for directing her money through the foundation? Did Energy Pioneers get some kind of extra benefit above and beyond the money Samuel wanted to give them in the first place? Does this represent some kind of misuse of the foundation’s mission? Is foundation money not supposed to go to anyone associated with Bill Clinton? Considering the fact that Clinton seems to be friends with nearly everyone in the world,1 that hardly seems likely.

I dunno. The Journal article does its best to make this sound shady in some way, but I’m not really seeing it. Can anyone help me out?

1Except me. What have I done wrong?