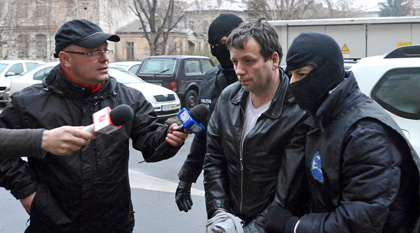 the revelation that Hillary Clinton had a private email address.

In early April he was extradited from Bucharest, where he had been serving a seven-year prison sentence, and conservatives have been drooling with anticipation ever since. Well, guess what? It turns out the hacker claimed in a jailhouse interview that he had, indeed, downloaded “gigabytes” of Hillary Clinton’s email. Imagine that! Let’s listen in:

“It was like an open orchid on the Internet,” Marcel Lehel Lazar, who uses the devilish handle Guccifer, told NBC News in an exclusive interview from a prison in Bucharest. “There were hundreds of folders.”

….A source with knowledge of the probe into Clinton’s email setup told NBC News that with Guccifer in U.S. custody, investigators fully intend to question him about her server.

When pressed by NBC News, Lazar, 44, could provide no documentation to back up his claims, nor did he ever release anything on-line supporting his allegations, as he had frequently done with past hacks. The FBI’s review of the Clinton server logs showed no sign of hacking, according to a source familiar with the case.

Well, I’m sure he’s telling the truth, not just making up shit. Naturally Fox News is on the case with a more recent jailhouse interview:

Wearing a green jumpsuit, Lazar was relaxed and polite in the monitored secure visitor center, separated by thick security glass. In describing the process, Lazar said he did extensive research on the web and then guessed Blumenthal’s security question. Once inside Blumenthal’s account, Lazar said he saw dozens of messages from the Clinton email address.

Asked if he was curious about the address, Lazar merely smiled. Asked if he used the same security question approach to access the Clinton emails, he said no — then described how he allegedly got inside.

“For example, when Sidney Blumenthal got an email, I checked the email pattern from Hillary Clinton, from Colin Powell from anyone else to find out the originating IP. … When they send a letter, the email header is the originating IP usually,” Lazar explained.

He said, “then I scanned with an IP scanner.” Lazar emphasized that he used readily available web programs to see if the server was “alive” and which ports were open. Lazar identified programs like netscan, Netmap, Wireshark and Angry IP, though it was not possible to confirm independently which, if any, he used.

In the process of mining data from the Blumenthal account, Lazar said he came across evidence that others were on the Clinton server. “As far as I remember, yes, there were … up to 10, like, IPs from other parts of the world,” he said.

So there you have it. Not only did Lazar hack into the Clinton server, but nearly a dozen other hackers did too. And every single one of them, apparently, has said nothing about it until now. Nor have they released any actual hacked emails. And they were all able to do it without leaving behind even the slightest trace.

Sigh. I’m sure this will lead to yet another whirlwind of emailgate activity. Buckle your seat belts.