For today’s sermon, I have chosen a passage from Al Franken’s Rush Limbaugh Is a Big Fat Idiot, written back when he was allowed to be funny. We no longer condone fat shaming, of course, but we do condone mockery of those who deserve it, especially 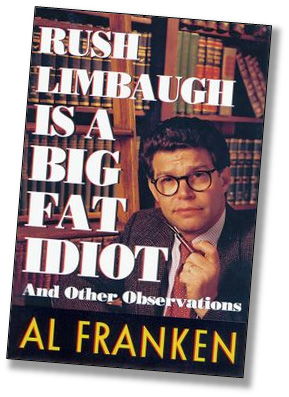 when it allows me to make a strained point about the upcoming election. Here is today’s text:

Limbaugh knows what’s good for him. Whenever he’s ventured outside the secure bubble of his studio, the results have been disastrous. In 1990, Limbaugh got what he thought was his chance at the big time, substitute hosting on Pat Sajak’s ailing CBS late night show. But the studio wasn’t packed with pre-screened dittoheads. When audience members started attacking him for having made fun of AIDS victims, he panicked, and they had to clear the studio. A CBS executive said, “He came out full of bluster and left a very shaken man. I had never seen a man sweat as much in my life.”

Limbaugh later apologized for joking about AIDS and promised to “not make fun of the dying.” But by early ’94, he had forgotten the other lesson: he needs a stacked deck. This time disaster struck on the Letterman show. The studio audience turned hostile almost immediately after Rush compared Hillary Clinton’s face to “a Pontiac hood ornament.” Evidently, that’s the kind of thing that kills with the dittoheads, but Letterman’s audience wasn’t buying.

So here’s my question: Is this what’s going to happen to Donald Trump? Obviously he’s not going to panic the way Limbaugh did, but so far his carnival barker act has only had to appeal to a smallish subset of angry white conservatives. Like Limbaugh’s dittohead radio audience, they think he’s great. But when Trump goes out into the great wide world of the general election, he’s going to learn that most people just aren’t buying what he’s selling. What will he do then? Change his tune? Dig himself an even deeper hole? Open an Instagram account? Claim that his private investigators have confirmed that Hillary Clinton is actually Canadian? Fire away in comments.