Sarah Kliff provides the basic argument for killing off the spelling bee:

Here’s how the final round of the Spelling Bee works. Once the competition is narrowed to two or three competitors, officials go to a list of 25 words. These are supposed to be the Bee’s hardest words, reserved for the very top contenders.

….But something weird happened in 2014: Both finalists got all their words right. It happened again in 2015….Co-championships used to be rare in the spelling bee world. Before 2014, there had only been three such instances in the Bee’s 90-year history. And now we’ve had the unprecedented situation of back-to-back co-champions. All because we’re running out of words that are too hard to spell.

I’ve been unhappy about the spelling bee for years. For starters, I don’t like the idea of national TV coverage for kids that young. Like the Little League World Series, it becomes an ever bigger television spectacle every year, and I just flatly think 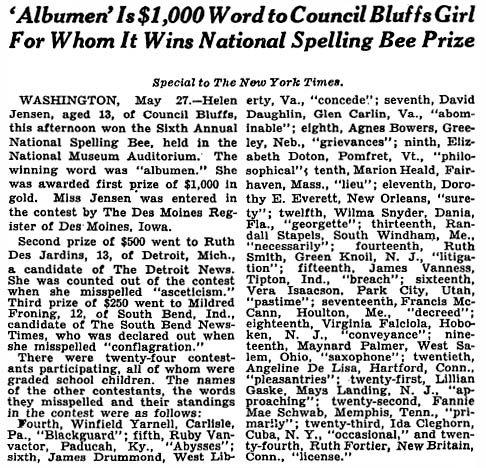 that’s wrong. At the very least, we should wait until kids are in high school before they get that much pressure dumped on them.

There’s also the fact that the bee has become cool at precisely the time that no one cares about spelling anymore. Computers have made it an obsolete skill, so the bee reinforces the notion that academic prowess is dumb and nerdy. Look at all those kids spending thousands of hours practicing something of no use whatsoever! Suckers!

Finally, as Kliff points out, the bee has finally been hacked. Unlike most competitions, spelling bees have a ceiling. If you can spell every word in the dictionary, you’re done. You’re the best speller that will ever live. And that makes it time to retire the trophy.

I’m all in favor of academic competitions. Maybe ESPN could hire some color commentators and televise the Academic Decathlon or something. That’s mostly for high school juniors and seniors, which is fine, and there’s no ceiling on the competition. If the kids keep getting better, just make the questions harder. Or maybe ESPN should make up its own academic version of American Ninja Warrior. “No one has ever made it through the trigonometry ladder in less than two minutes, but it might happen tonight! Tune in!”

But the spelling bee? It had a great run. Now it’s time to end it.