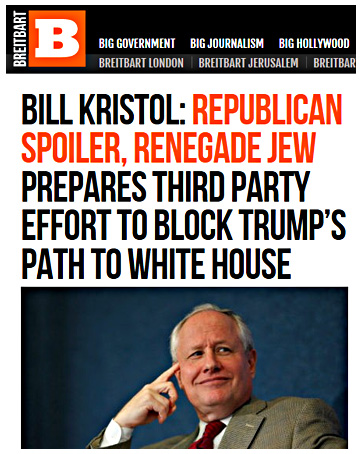 Well, here’s an interesting headline from the Trump worshippers at Breitbart. “Renegade Jew” is probably not an attack that Bill Kristol gets often. But maybe Breitbart can back up the charge?

The article, it turns out, is by prolific nutcase David Horowitz, who finally has this to say in the final paragraph about the Iran deal:

Hillary Clinton and all but a handful of Democrats have supported this treachery from start to finish. Kristol is now one of their allies….To weaken the only party that stands between the Jews and their annihilation, and between America and the forces intent on destroying her, is a political miscalculation so great and a betrayal so profound as to not be easily forgiven.

Normally I’d say that writers don’t write their own headlines, but in this case I suspect that Horowitz’s only complaint is that it’s a little too milquetoast.