Yesterday I nominated Joe Conason to write a series of cheat sheets on all the Hillary Clinton “scandals” of the 90s. Today he emailed to beg off, offering an excuse about having to finish up a “book,” 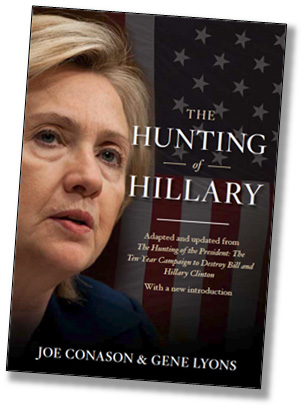 which I gather from context is some kind of long, paper-based blog post. Anybody ever heard of this before?

But all is not lost. While we wait for this “book,” it turns out that he and Gene Lyons have created “The Hunting of Hillary,” an abridged version of their original comprehensive look at all the Clinton crap of the 90s. And it’s free! I read most of it over lunch today, and if you need a quick refresher on this stuff, it’s pretty good.

For those of you who are new to all this, I’ll warn you right off that you might initially feel inundated by a horde of Hales and McDougals and Tuckers and Nelsons and Scaifes. Don’t worry, though: it will start to make sense eventually. They’re mostly just various types of unsavory Arkansas political fauna.

Anyway, it’s all here in PDF form, free for nothing more than an email address. I hate to do this to you, but I have a feeling we’re all going to need to brush up on this stuff sooner rather than later. Might as well do it now.