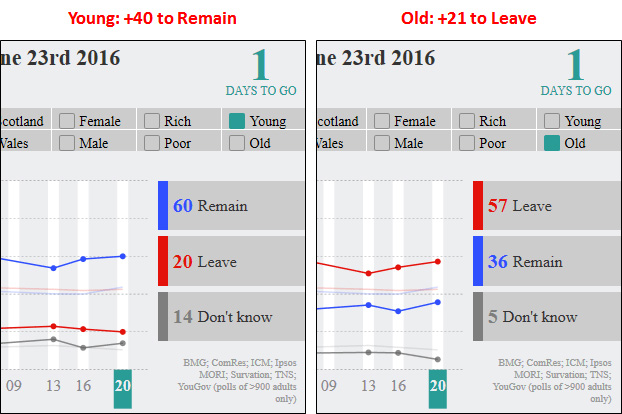 If young voters don’t bother to turn out, Britain will end up with the worst imaginable world—and that’s regardless of whether you support or oppose Brexit. This isn’t an ordinary election, after all. It’s one thing for older voters to to get their way about, say, a presidential candidate. In a few years you get another crack at things, and maybe your generation wins that one.

But Brexit is a permanent thing. If a bunch of nostalgic/resentful/racist oldsters vote Britain out of the EU, they’ll be forcing their bitterness on a generation that doesn’t want it. The truth is that Brexit will barely affect older voters either way: they mostly don’t work and they mostly have only local friendships. But it will certainly affect all of the younger generations, who have decades left to live in whatever Britain is bequeathed to them. They want to grow up in a continent where they can work wherever they want and associate with whomever they please. It would be a travesty for a sour group of elderly misanthropes to deny them that.