Today’s big news is the overall implosion of the Donald Trump campaign. He’s repeatedly melted down on the stump over the past month. He’s trailing Hillary Clinton by a mile in the latest polls. He fired his campaign manager this morning. His ego apparently doesn’t allow him to beg other people for money, so he’s barely done any fundraising at all. The fight to stop him at the Republican convention now has the support of nearly 400 delegates. With the election only 20 weeks away, he still has virtually no staff. He’s being hammered by negative advertising on TV and isn’t doing anything to fight back. (So far he’s run exactly zero ads.)

Except for the personal meltdown stuff, all of this is basically a money problem. Trump doesn’t have any. In fact, pretty much everything you need to know about Trump’s campaign—and his underlying  business acumen, though that’s a story for another time—is captured in FEC form 3P. As you can see, it shows that Trump ended the month of May with $1.28 million on hand. That’s disastrous. It’s unbelievable. It’s less than a tenth of what he should have. It’s less than a well-run congressional campaign should have. It’s $40 million less than Hillary Clinton’s campaign has. It’s Donald Trump in a nutshell.

So will he just finance the campaign out of his own wallet? Not a chance. Bluster aside, he doesn’t have the ready cash to do it. And he wouldn’t even if he could. After all, this is the guy who eagerly transferred the five-figure salary of his longtime bodyguard to his campaign at the first opportunity. Do you really think he’s ready to blow $500 million on a nearly certain losing cause? 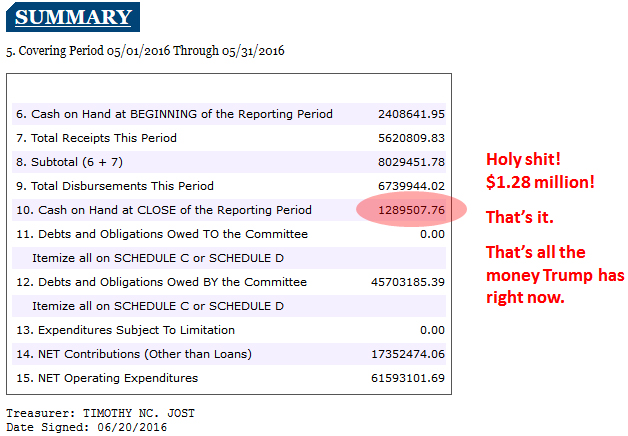