We already know that Donald Trump thinks Judge Gonzalo Curiel is biased against him because he’s “Mexican.” But what about other judges with non-white backgrounds? John Dickerson asked him about this on Face the Nation today:

Later, when asked if he believed a Muslim judge would treat him unfairly because of another controversial proposal to temporarily bar Muslims from entering the U.S., Trump replied: “It’s possible, yes. Yeah. That would be possible, absolutely.”

“Isn’t there sort of a tradition though in America that we don’t judge people by who their parents were and where they came from?” Dickerson asked. “I’m not talking about tradition,” Trump replied. “I’m talking about 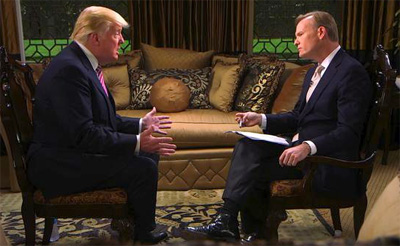 common sense, okay? He’s somebody, he’s proud of his heritage.”

OK then. No Hispanics and no Muslims. I wonder which non-white ethnicities are allowed to pass judgment on Trump? He’s been pretty rough on China and Japan, after all. And Trump was king of the birthers a few years ago, so blacks probably don’t think much of him. This brings up an obvious question:

When questioned on whether he would instruct his lawyers to ask that Judge Curiel get thrown out of the Trump University case, Trump said: “Well, I may do that now—We’re finding things out now that we didn’t know before.”

Hmmm. He wants Curiel tossed off the case, but not because of his Mexican heritage. Why is that? A reader points me toward a piece by Garrett Epps in the Atlantic this morning about a 1998 case overseen by federal judge Denny Chin:

Eventually, Chin dismissed Klayman’s client’s case….Not long after, the judge got a letter from Klayman and his co-counsel, Paul Orfanedes, asking a few “questions” about the judge’s Asian American background….In a written response, Chin…lowered the boom. Klayman and Orfanedes were required to withdraw as counsel from the case and would not be permitted to appear in Chin’s court on any matter ever again. They would be required to show his opinion to any other judge in the district in any future case. The court clerk would also report the sanctions to every court where they held bar membership.

….The Second Circuit briskly affirmed Chin’s order. “Courts have repeatedly held that matters such as race or ethnicity are improper bases for challenging a judge’s impartiality,” wrote the chief judge, Ralph Winter, a Reagan appointee.

In public, Trump can rant about anything he wants. But in court, if his lawyers so much as mention Curiel’s Mexican heritage in a recusal motion they risk nuclear sanctions. Even for Trump, they aren’t willing to do that.

Still, there are always those “other things.” My own guess is that this is a blustery Trumpian fiction, just like all the evidence of Barack Obama’s Kenyan birth that Trump insisted his private investigators had been digging up back in 2011. We’ll see.

Bottom line: Donald Trump apparently believes that the only judge qualified to try his case is a white Christian. I guess this is the new, more presidential Trump that his backers keep insisting will show up any day now for the general election.