Josh Marshall says that Donald Trump’s meltdown of the past few weeks is just what happens when a fast-talking hustler moves from the cozy confines of a friendly audience to the harsh outside world where his longtime act is met with wariness and ridicule:

The Trump world is based on a self-contained, self-sustaining bullshit feedback loop. Trump isn’t racist. He’s actually the least racist person in America. Hispanics aren’t offended by his racist tirades against Judge Curiel. He’s going to do great with Hispanics!

….Trump’s problem is that the general election puts him in contact with voters outside the Trump bubble….That creates not only turbulence but turbulence that builds on itself because the interaction gets in the spokes of each of these two, fundamentally different idea systems. You’re seeing the most telling signs of that with the growing number of Republicans who, having already endorsed Trump, are now 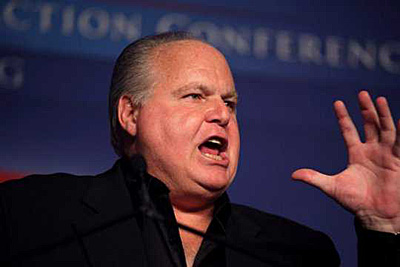 literally refusing to discuss him or simply walking away when his name is mentioned.

Like a one-joke comic trying to move up from the local nightclub circuit Trump is bombing now that he’s facing a more cosmopolitan audience. And that prompts me once again to share Al Franken’s description of what happened to high-flyer Rush Limbaugh in the early 90s when he decided to see if he could move beyond the narrow confines of his radio show:

Whenever he’s ventured outside the secure bubble of his studio, the results have been disastrous. In 1990, Limbaugh got what he thought was his chance at the big time, substitute hosting on Pat Sajak’s ailing CBS late night show. But the studio wasn’t packed with pre-screened dittoheads. When audience members started attacking him for having made fun of AIDS victims, he panicked, and they had to clear the studio. A CBS executive said, “He came out full of bluster and left a very shaken man. I had never seen a man sweat as much in my life.”

Limbaugh later apologized for joking about AIDS and promised to “not make fun of the dying.” But by early ’94, he had forgotten the other lesson: he needs a stacked deck. This time disaster struck on the Letterman show. The studio audience turned hostile almost immediately after Rush compared Hillary Clinton’s face to “a Pontiac hood ornament.” Evidently, that’s the kind of thing that kills with the dittoheads, but Letterman’s audience wasn’t buying.

This is Donald Trump’s new world. Sure, the dittoheads are still there. And they’re enough when you’re just trying to win the local nightclub circuit that calls itself the Republican Party these days. But it’s not enough to win a general election.