Timothy Edgar—former national security counsel for the ACLU, former deputy for civil liberties in the George Bush administration, and the first-ever director of privacy and civil liberties under President Obama—says that using terrorist watchlists to ban gun sales doesn’t pose a civil liberties problem. After all, we already use these lists to prohibit people from boarding airplanes:

According to the Supreme Court, both the right to keep and bear arms and the right to travel are fundamental liberties. The right to travel is exercised far more frequently. While there were 23 million gun sales requiring a background check in 2015, there were almost 900 million travelers on domestic and international flights serving the United States in the same year.

….While using the terrorist watch list to prevent gun sales would inconvenience those who may be on the list by mistake, there is no reason to fetishize the 2nd Amendment over other rights. The no-fly list causes inconvenience and hardship, but not even the ACLU thinks it should be abolished because it understands the need to keep terrorists from boarding airplanes. Preventing terrorists from buying weapons is just as necessary.

This is a rather cavalier description of the ACLU’s stand on no-fly lists:

We filed a landmark challenge to the No Fly List in which a federal judge struck down the government’s redress process, ruling that it “falls far short of satisfying the requirements of due process” and is “wholly ineffective.”…A bloated, opaque watchlisting system is neither fair nor effective. A system in which innocent people languish on blacklists 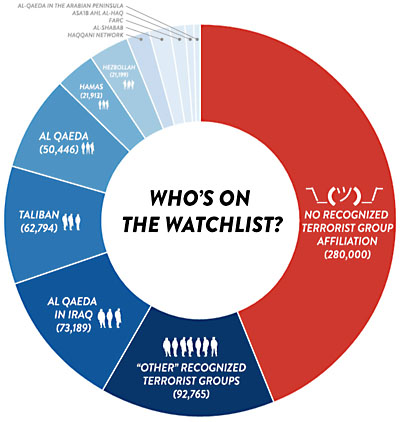 indefinitely, with their rights curtailed and their names sullied, is at odds with our Constitution and values.

“Due process” is the key phrase here: the US government should never be able to revoke fundamental liberties based on mere suspicion. This doesn’t necessarily mean that suspects are entitled to a full-on court hearing, but due process does mean something substantive, speedy, and fair. An appeal to the same agency that took away your rights in the first place doesn’t count in my book—especially when that agency is literally bound by no rules about what it does and doesn’t have to tell you about why you’ve been blacklisted. That’s how the no-fly list works, and the appeal process in Sen. Dianne Feinstein’s proposed ban on gun purchases would be at least as bad.

In any case, I have a question for Edgar and other proponents of both the no-fly list and the gun ban: what other fundamental liberties should the government be able to ignore in the name of fighting terrorism? This isn’t a frivolous question. If these two rights can be taken away, what’s the argument for not restricting the right to free speech of people on terror watchlists? Or fair trials? Or self-incrimination? Or freedom of religion? Or cruel and unusual punishment?

This kind of question is too often treated as nothing more than the juvenile hysteria of civil liberties purists who see fascism around every corner. But think about where we are. The right to travel freely has already been effectively eliminated. Eliminating the right to bear arms has a pretty good chance of passing Congress. George Bush plainly had no qualms about cruel and unusual punishment, and there’s no telling if he ever got close to allowing the torture of American citizens. Donald Trump gets loud cheers when he proposes substantial infringement on Muslim freedom of religion. Warrantless surveillance is now so normal it barely merits a yawn. And we hear endlessly these days about jihadist recruiting via social media, which suggests—to use Edgar’s phrasing— that preventing terrorists from using Facebook might be just as necessary as keeping them off airplanes.

We’re not close to fascism. But when a former counsel for the ACLU argues that taking away a constitutional right is OK because we’ve already taken away another one, it’s not very hard to see the slippery slope in action. By that logic, there’s literally no right that’s safe for anyone who’s ever been investigated for terrorist connections by the FBI. As tempting as it is for frustrated liberals to exploit a horrific massacre in order to pass something—anything—related to gun control, this is the wrong way to go about it.