A few random hits from my reading list today:

Stimulus. Softball pitchers are awesome! “Pit a professional baseball player against a top fastpitch pitcher, and he’ll most likely strike out, as hitting legends Babe Ruth, Ted Williams, and Mike Piazza all did when they faced fastpitch pitchers at charity events.”

Response. Hold on. I’ve heard this before. But if it were really true, everyone in baseball would pitch underhanded. So it must not be true. Right?

Stimulus. “A new study of physicians’ incomes finds white males earn substantially more than their black counterparts, even after adjusting for a variety 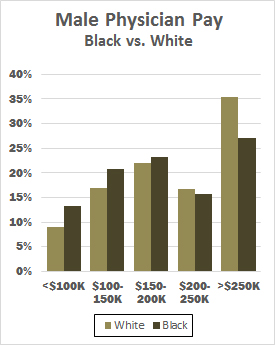 of factors — including their specialty.”

Response. Actually, once all the controls are in place, the study finds that the difference is $202,000 vs. $224,000. That’s 9 percent, which is less than I would have guessed. What’s more, the sample that includes the controls has only 518 black male physicians—and as near as I can tell, the difference in income is almost entirely due to the difference in the top earning level, which includes only 140 black physicians. That’s a pretty small sample, and it’s not even a random sample. If you move a mere 31 black physicians from the $200K group to the $250K group, the difference goes away. I don’t doubt for a second that white doctors make more than black doctors, but the delta is actually modest, and is quite possibly due to a small number of white doctors who have extremely lucrative practices. Take this with a grain of salt.

Stimulus. “The world of The Handmaid’s Tale been invoked many, many times throughout the current election cycle as the world we are clearly hurtling toward.”

Response. I had to read endless nonsense like this on Handmaid’s 25th anniversary. But it’s not true. At all. Not even the tiniest little bit. I mean, read the book, for chrissake. It’s now been over 30 years since it was published, and we’re still no closer. Knock it off, folks.

Stimulus. The ad for used Toyotas that’s been running lately in the Los Angeles area.

Response. All the hot chicks are attracted to guys with used Camrys? Seriously? Who comes up with this stuff?

Stimulus. “You stress over outfits for days,” the Warriors’ Stephen Curry said in an interview….“I’ve got to make sure everything looks good coming out of the car,” Curry, the league’s most valuable player, said. “You don’t want to have a missed button or a wrinkled shirt.”

Response. See? It’s not only Hillary Clinton who has to worry about her outfits. I wonder if Curry has any $12,495 $7,497 Armani jackets in his closet?