MoJo editor Clara Jeffrey points me to this today:

Ad blocking has become a hot-button media issue as consumers push back on perceived ad overload and tracking mechanisms across the internet. Research firm Ovum estimates that publishers lost $24 billion in revenue globally last year due to ad blocking.

Hmmm. $24 billion. I wonder how research firm Ovum came up with that number? Let’s hop over and—oh, hold on. Just wait a few years and we’re headed toward Armageddon:

Players in the digital publishing industry can’t stop talking about ad blocking. And they shouldn’t — according to Ovum’s new Ad-Blocking Forecast, the phenomenon will result in a 26% loss in Internet advertising revenues in 2020, which equates to $78.2bn globally. However, if publishers act now, that percentage could be as little as 6%, or $16.9bn. The question is: How can publishers make that much of a difference?

Yikes! I’ve put this forecast into handy chart form since numbers always look more official when you do that. But I still don’t know how Ovum came up with these figures, since I’m not a client and don’t have 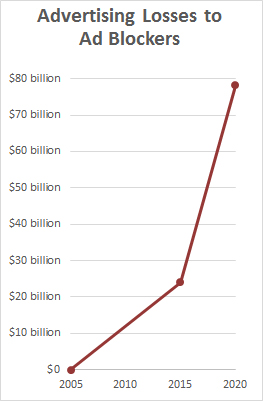 access to their reports. Which is fair enough. Nonetheless, I’m intrigued by this:

To take back control, publishers need to show consumers why advertising is needed and that it can be a positive addition to content.

….Publishers also need to work with advertisers to improve the consumer experience. The quality of the adverts is a major issue for many consumers. There are not enough examples of web-delivered adverts that enhance the experience for the reader….Forcing adverts on consumers through ad reinsertion or by blocking users of ad blockers from accessing content will have a negative long-term effect….Ovum predicts that the ad blockers — with input from a network of unpaid developers — will win the battle and ad blockers will remain more advanced than the anti-ad blockers in the long term.

Not only will websites that try to force the issue risk annoying consumers further but these websites also risk driving readers toward their competitors who don’t require ad blockers to be switched off or who provide an alternate means of paying for content.

But no. TV ad revenue has been surprisingly stable since 1999 despite a decline in viewership. The big problem, it turns out, isn’t the ad skippers, it’s the number of people watching TV in the first place. I suspect the same is true of online journalism. Ad blockers aren’t the problem, readership is. Provide a well-targeted audience and advertisers will pay for it. The folks who skip the ads probably weren’t very good sales prospects anyway.

In any case, it doesn’t matter: Ovum is almost certainly correct that ad-blockers will win the war against ad-blocker-blockers, which means that online sites are waging a losing battle that does nothing but piss off their customers. So cut down on the quantity of ads and target them better instead. That may or may not work, but it’s likely to work a lot better than continuing to fight the ad-blocker wars.