In 2012, Kansas Gov. Sam Brownback launched a “real live experiment” in conservative governance. He slashed income taxes for top earners and eliminated them for more than 330,000 small businesses, promising the cuts would be “a shot of adrenaline into the heart of the Kansas economy.” Instead, the result has been disastrous. By the end of 2015, the state had lost nearly $3 billion in revenue and was behind most other states in job growth. And when the courts challenged the constitutionality of the bare-bones budgets, Brownback and his allies launched an all-out war on the state’s judges.

Click the link to read all about the farcical war that Brownback waged on his state’s judicial system. But if you’d like some cold, hard numbers to go with your story, Menzie Chinn is your man. Here, for example, is economic growth in Kansas before and after Brownback took office: 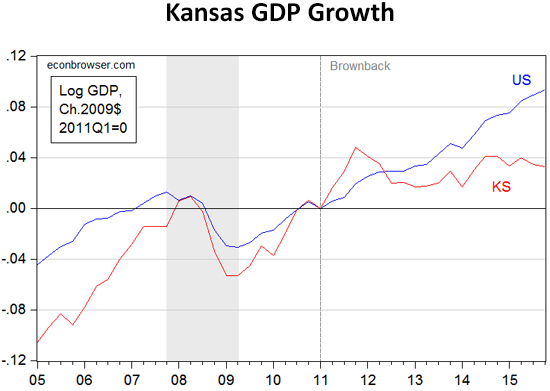 Ouch. From 2005 to 2011, Kansas was growing faster than the US economy. This continued for about a year after Brownback took office, at which point economic growth declined and then flatlined. But hey—maybe things are just tough in the Midwest? Not really, it turns out. Here’s how Kansas compares to her neighboring states since 2011: 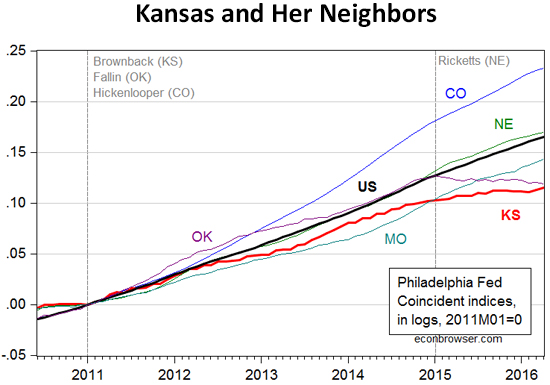 Chin has also done a forecast of how well Kansas should have done based on historical trends, and the picture is just as un-pretty as these. Basically, (a) Kansas was doing OK, (b) Brownback rolled in and decided to make Kansas a test bed for conservative economics, and (c) Kansas promptly went to hell.

This, of course, has caused conservatives to think long and hard about their contention that cutting taxes on the rich and slashing bloated budgets will supercharge the economy. Haha. Just kidding. What they’ve actually done is either (a) ignore Kansas or (b) spend lots of time trying to dig up reasons that Kansas is a special case and would have done even worse if Brownback hadn’t stepped in. These reasons tend to be pretty ridiculous, but so far they’ve been good enough to keep the rubes in line. And that’s what matters, right?