I’m not quite sure why this is such big news, but apparently it is: 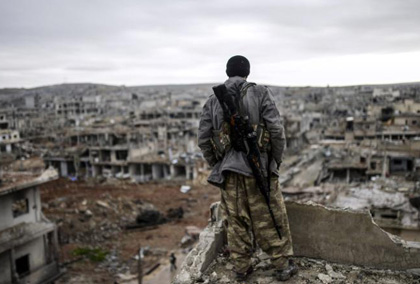 President Bashar al-Assad, including the use of military force.

The 51 signatories to the document, which was sent through the department’s internal “dissent channel,” were largely mid-level diplomats based in Washington and overseas, including a Syria desk officer and the consul general in Istanbul….The memo calls on the administration to respond to the worsening humanitarian situation in Syria — where at least a quarter of a million people have been killed in five years of civil war and nearly half the population has been internally displaced or has fled the country — with air attacks and other “stand-off” weapons, fired from a distance without troops on the ground, to force Assad into U.S.-led negotiations to end the conflict.

I just don’t get it. If you want to argue for a massive ground campaign to wipe Assad off the map, fine. I disagree, but at least we’re talking about something real. Air strikes and “stand-off” weapons, by contrast, are a joke. Those just aren’t going to make a significant difference—aside from possibly prompting Russia to get back into the air strike business too, that is.

This stuff never stops. Everyone wants a miracle cure in the Middle East: the mythical “just right” military response that doesn’t involve ground troops; won’t get any Americans killed; and doesn’t take very long—but that will be magically effective anyway. It’s nuts. There are rare, specific occasions where this kind of thing might work: protecting a vital dam, supporting an allied offensive, etc. But in general? Forget it. You either fight a war or you stay out. This idea that we can be effective in a massively complex tribal conflict without getting our boots muddy is wishful thinking. It’s not a miracle cure. It’s snake oil.