David French doesn’t want effete liberals telling him what kind of gun he can and can’t use to defend himself:

Any person who breaks into my house or who threatens my family on my property will very soon find themselves staring at the business end of an AR-15 — specifically this one, made by the DoubleStar Corporation, a 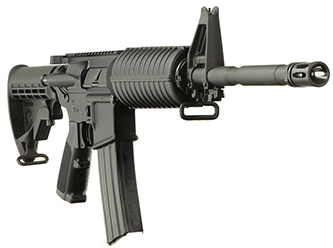 Here’s the product product pitch: “The Mil Spec Dragon is what black rifle purists dream about! The MSD is built as close to military specifications as possible while maintaining its semi-auto, civilian legal status. No frills, no flash, just a high quality, reliable, carbine that is ready for any mission.” It comes standard with an A-2 flash suppressor and a forged “F” front sight tower with taper pins. Popular upgrades include a detachable carry handle, Hogue pistol grip, Ace SOCOM stock, “H” buffer, winter trigger guard, and DS 416 4-rail slimline handguards.

But now I’m told — largely by people who don’t know the first thing about firearms — that no American “needs” an AR-style rifle. But when your life is on the line, what do you want? More accuracy or less? More firepower or less? More recoil or less? More reliability or less?

Quite so. And French is right when he says later that banning assault rifles like this one wouldn’t have much effect on international terrorists. I assume he’d agree with what I said on Sunday: “Banning Muslim visitors or ramping up the air war against ISIS would have done nothing to stop Omar Mateen. Banning guns would have done nothing to stop either the Paris attacks or any other act of international terrorism.”

So here’s my question. It’s a real question. Like most AR-15 variants, the Mil Spec Dragon comes with a 30-round magazine. Is that really necessary for self defense? I can’t pretend that there are literally no circumstances where it might come in handy, but it sure seems pretty unlikely in your basic home robbery scenario. Surely a 10-round magazine would be sufficient for virtually any real-world self-defense application? At a guess, three or four rounds would be more than enough. Or one.

So what’s the argument against a ban on large-capacity magazines? Other than, “they’re bitchin,” that is. A ban on large magazines would surely slow down folks like Omar Mateen without infringing in any real way on anyone’s Second Amendment right to defend themselves. Is there an answer that doesn’t rely on absurdly unlikely scenarios?