A couple of days ago I mentioned that even if Obamacare premiums increase a fair amount next year, they’ll still be way below original projections. An 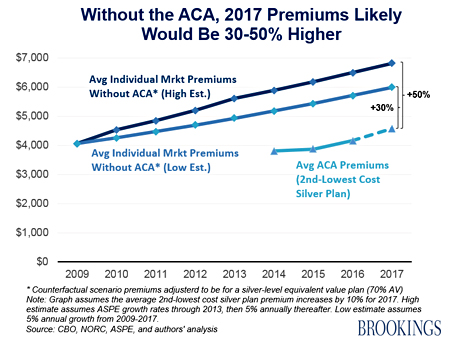 analysis today in Health Affairs confirms this and adds more meat to the story:

Jon Gabel and Stephen Smith of NORC at the University of Chicago conducted the most thorough analyses of how much premiums in the individual market increased between 2009 and 2013….They imply that ACA marketplace premiums for the [second-lowest-cost silver] plan in 2014 came in a remarkable 21 percent lower than average individual market premiums the year prior, or 32 percent lower when accounting for the new plans’ higher actuarial value, even without incorporating likely utilization increases in response to the additional coverage.

….That the ACA might have caused premiums to drop so precipitously when its marketplaces took effect may seem surprising at first — it was to us….However, the premium reductions make more sense upon deeper analysis.

First, even though sicker people were charged higher premiums in the pre-ACA world (and some were denied coverage altogether), many still purchased insurance, but likely at significantly higher rates….Moreover, by creating large premium subsidies and imposing the individual mandate, the ACA may have caused a greater influx of relatively healthy enrollees into the individual market in 2014 and beyond.

….Third, selling costs are likely to be lower in the ACA marketplaces because of the prohibition on medical underwriting and limited variation in the policies and policy riders that can be offered.

Competition is good. It’s what caused the lower prices to begin with, as insurers lowballed their premiums in order to build market share. And it’s what keeps prices low as insurers continue to compete on the relatively level playing field of Obamacare.

But competition is tough on the companies doing the competing. Sometimes it causes them to exit a market. Sometimes individual regions can end up with no providers. It’s rare, but not impossible. And of course, competition is only possible if there are enough competitors. That’s why the Obama administration is opposing the merger of two big insurers—which would leave us with only three big, nationwide health insurance providers. As Adam Smith pointed out a couple of centuries ago, sellers don’t like competition. They’d rather merge or collude so they can charge the highest possible prices. But competition is what’s made Obamacare work, and maintaining competition is a key part of keeping costs low in the future. Anyone who believes in the free market should want more competition, not less.