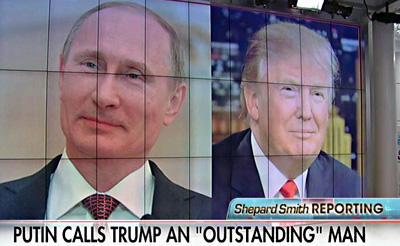 Today brings one of the weirdest stories of any recent presidential campaign: Hillary Clinton’s campaign has essentially accused Donald Trump of being a pawn of the Russians. Not in hints; not from an unaffiliated Super PAC; not in a deniable statement from an arms-length surrogate; and not in vague “doesn’t put America first” terms. Friday’s release of hacked emails from the Democratic National Committee, says Clinton’s campaign manager, “was done by the Russians for the purpose of helping Donald Trump.” And Trump intervened to change the Republican platform last week in a way that “some experts would regard as pro-Russian.”

Believe it or not, though, that’s not the weirdest part of this story. The weirdest part is (a) Clinton’s campaign might be right, and (b) this is not really getting an awful lot of attention from the media.

Let that sink in: the Clinton campaign has explicitly accused the Russians of being on Team Trump and suggested that Trump might be on Team Russia. And although the media is covering it, it’s not the top story anywhere. Seriously. WTF does it take these days to lead the news?

In a nutshell, here’s the evidence. A few months ago, when the DNC’s email was hacked, outside experts immediately said it looked like it had been done by the Russians. Here’s the New York Times:

Researchers have concluded that the national committee was breached by two Russian intelligence agencies, which were the same attackers behind previous Russian cyberoperations at the White House, the State Department and the Joint Chiefs of Staff last year….Evidence so far suggests that the attack was the work of at least two separate agencies, each apparently working without the knowledge that the other was inside the Democrats’ computers.

….The experts cited by Mr. Mook include CrowdStrike, a cybersecurity firm that was brought into the Democratic National Committee when officials there suspected they had been hacked….Officials at several other firms that have examined the code for the malware used against the Democratic National Committee and the metadata of the stolen documents found evidence that the documents had been accessed by multiple computers, some with Russian language settings.

Eventually the email cache ended up in the hands of Wikileaks, which published it on Friday. “The release to WikiLeaks adds another strange element,” says the Times, “because it suggests that the intelligence findings are being ‘weaponized’ — used to influence the election in some way.” Other similar stories include this one from the Washington Post and this one from Defense One. Beyond that, Russian media has become conspicuously pro Trump over the past year.

So that’s the evidence that Russia is backing Team Trump. But what about the evidence that Trump is on Team Russia? This is a little trickier, but it turns out Trump has an impressive number of pro-Russian views:

Needless to say, there could be innocent explanations for all these things. Still, they add up to a suspiciously large number of positions that are not just pro-Russia, but unusually pro-Russia. Item #1 has no support among other conservatives, and items #2-6 have no real equal in either political party.

So what’s going on? The evidence that Putin would like to install Donald Trump in the White House is pretty strong. The evidence that Trump would pursue Russia-friendly policies in return is much more circumstantial, but still pretty substantial. Manchurian candidate jokes aside, this is something that deserves a lot more coverage than whatever Trump happened to tweet last night.