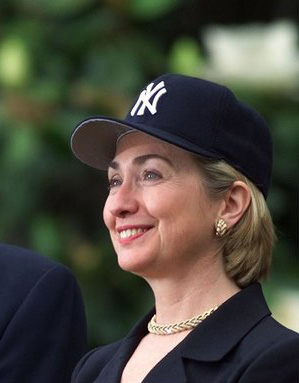 Here is Gail Collins a couple of days ago in a big profile of Hillary Clinton with the ironic subhead, “How is it possible that we still don’t really know the most famous woman in America?” She’s describing Hillary’s 2000 run for the Senate in New York:

She had trouble with the carpetbagging issue. At one point, Clinton attempted to woo the locals by claiming that although she’d been brought up as a Chicago Cubs fan, she had always rooted for the Yankees because people need a team in each league. This was contradictory to every law of Midwestern fandom, which holds that no matter what else you do, hating the New York Yankees is a central principle of life.

Hillary Clinton is indeed a guarded person. That said, perhaps the reason we don’t know her is because of reporting like this. Collins doesn’t quite say that Hillary was lying, but that’s the pretty obvious subtext. It’s what nearly everybody thought at the time.

There’s only one problem: Hillary really was a fan of both the Cubs and the Yankees. And she really was a big baseball fan as a kid. Bob Somerby collects the evidence today. Here’s a childhood friend reminiscing about her in 1993, six years before New York was even a twinkle in Hillary’s eyes:

“We used to sit on the front porch and solve the world’s problems,” said Rick Ricketts, her neighbor and friend since they were 8. “She also knew all the players and stats, batting averages—Roger Maris, Mickey Mantle—everything about baseball.”

And this, in a 1994 story about a White House party for documentarian Ken Burns when he released “Baseball”:

“That was a great swing,” Burns told her. “Did you get some batting practice before the screening, just to warm up?” Mrs. Clinton, who as a kid was a “big-time” fan of the Chicago Cubs and New York Yankees and “understudied” Ernie Banks and Mickey Mantle, smiled.

How about that? Hillary was telling the truth the whole time. Hard to believe, isn’t it?