The Wall Street Journal reports that Italy could be ground zero for the next European economic crisis: 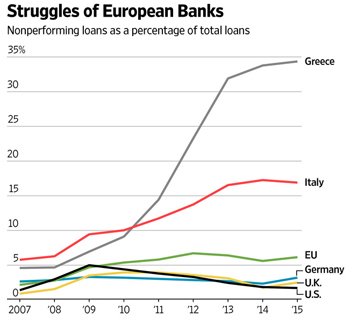 only 5%. Among publicly traded banks in the eurozone, Italian lenders account for nearly half of total bad loans.

….The U.K. vote to exit the European Union has compounded the strains on Europe’s banks in general and Italy’s in particular…. Brexit has many executives concerned that central banks will keep interest rates lower for longer than they might otherwise, in an attempt to counteract the slower growth—in the eurozone as well as Britain. European banks’ stocks slid after the vote, with those in Italy especially hurt.

….“Brexit could lead to a full-blown banking crisis in Italy,” said Lorenzo Codogno, former director general at the Italian Treasury. “The risk of a eurozone meltdown is clearly there if Brexit concerns are not immediately addressed.”

It’s not clear to me just how bad things really are in Italy, since the Journal compares their level of nonperforming loans to the US, not to peer countries like Portugal or Spain. Even better would be to tell us how Italy’s current NPL level compares to past levels. It it really way out of whack historically? Or just mildly worse than usual during this phase of an economic cycle?

That said, it’s apparent that Europe’s banking sector continues to have problems thanks to the endless can kicking done between 2010 and 2014. The hope that everything would just spontaneously get better if structural problems were ignored long enough was never a great plan, and it still isn’t. However, a standard bank bailout isn’t possible, thanks to new rules adopted by the EU two years ago. Philipp Hildebrand suggests instead something simpler:

As Angela Merkel, German chancellor, has pointed out, the rules as they stand…permit the temporary shoring-up of banks with public money to make up for a capital shortfall revealed by a regulatory stress test, if raising private capital is not feasible. It is a fortunate coincidence that the 2016 European Banking Authority’s stress test campaign is under way. And it is clear, with most European banks trading far below book value, that raising private capital at this juncture is not a practical option. At the same time, most European banks are perfectly viable, and so resolution is not the way to go.

The European Commission should therefore allow those governments that wish to do so to take temporary equity stakes in banks that need a capital boost. Importantly, state aid rules apply, so this should not be a free handout. Rather, it should be conditional on banks committing to significant steps to address the structural difficulties they face and diversifying income sources. This would be similar to the US Tarp process in 2008 that ended up returning money to taxpayers.

Perhaps so. “Temporary,” of course, has a tendency to last a long time in some countries. Still, this might be the best and easiest solution. If Italy thinks it best to rescue its own banks with an equity infusion, they should probably be allowed to do so. Ditto for Portugal, Spain, and other countries with continuing bank sector weakness. I don’t know if it would work as well as TARP did—and TARP did work, despite the bad rap it’s gotten—since Italy’s economy is fundamentally weaker than the US economy ever was. But it’s worth a try.