The theme of the convention tonight was supposed to be “Make America Work Again.” But Donald Trump has a famously short attention span, and apparently that’s spilled over into the scheduling of the entire convention. As near as I can tell, not a single person talked about jobs and the economy except maybe soap opera star Kimberlin Brown, who grows avocadoes and spent several minutes railing against Obamacare.

However, I didn’t watch every minute of the convention, so maybe I missed one of the early C-list speakers talking about jobs. On the off chance that this happened, I have two charts for you. First, here’s a re-up of one of my favorites, showing that Republicans did everything they possibly could to keep America from recovering while Obama was president: 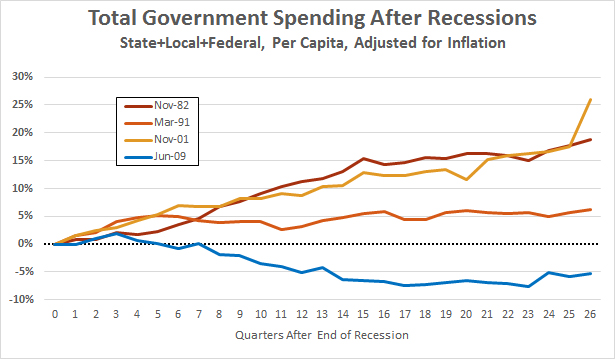 As you can see from the various red and orange lines, Republicans were eager to increase spending for Reagan, Bush Jr., and Bush Sr.—at least until he lost the election and Clinton took over. Then they cut back. For Obama, they depressed public spending from the start. That’s the blue line. Today, more than six years after the official end of the recession, public spending is more than 20 points lower than the trendline for Reagan and Bush. 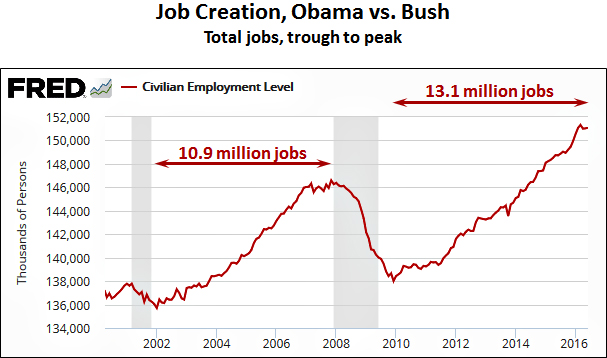 Even with two big tax cuts and a housing bubble, Bush Jr. managed to create only 10.9 million jobs. Obama, even with the headwind of Republican obstruction, has created 13.1 million jobs so far.

You can decide for yourself how much credit presidents deserve for the strength of the economy on their watch. But one thing is sure: Obama started with the worst recession since World War II, and six years later he’s created over 13 million jobs; the unemployment rate is under 5 percent; inflation is low; and the economy is growing faster than nearly any other rich country. Imagine what he could have done if Republicans hadn’t stood in his way the entire time.