I work for a 501(c)(3) nonprofit, so I’m keenly aware that I’m not allowed to endorse candidates. That means y’all will just have to guess who I’m voting for in November. I apologize for having to keep you in such suspense.

Until recently, though, I had no idea why non-profits weren’t allowed to endorse candidates. Then I began hearing about the “Johnson Amendment” from Donald Trump. Obviously someone put a bug in his ear, and he’s been repeating it 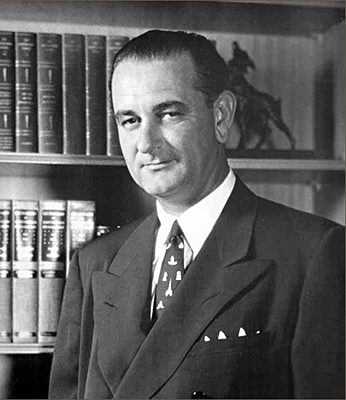 like a mantra for weeks now. So what’s this all about?

The “Johnson Amendment,” as the 1954 law is often called, is a U.S. tax code rule preventing tax-exempt organizations, such as churches and educational institutions, from endorsing political candidates. At the time, then-Senator Lyndon B. Johnson was running for re-election, and he and other members of Congress pushed the amendment to stop support for their political opponents’ campaigns, George Washington University law professor Robert Tuttle has explained. Many have also argued the amendment served to stop black churches from organizing to support the civil rights movement.

“All section 501(c)(3) organizations are absolutely prohibited from directly or indirectly participating in, or intervening in, any political campaign on behalf of (or in opposition to) any candidate for elective public office,” the IRS explains of the rule on its website. “Violating this prohibition may result in denial or revocation of tax-exempt status and the imposition of certain excise taxes.”

There you go. So why has Trump suddenly decided this is a threat to democracy? You can probably guess: because conservative churches want to endorse Republican candidates and give them lots of money without losing their tax-exempt status. Jerry Falwell Jr. explains:

In recent years, religious liberty group the Alliance Defending Freedom has advocated for its repeal, arguing that the law is unconstitutional and lets the IRS “tell pastors what they can and cannot preach,” and “aims to censor your sermon.”…“This is something that could make a difference with Christian voters in the fall,” Falwell says. “It is almost as important for Christians as the appointment of Supreme Court justices.”

My first thought about this is that it would provide yet another avenue for big money in politics. I can imagine rich donors setting up, say, the Church of the Divine Supply Siders and then funneling millions of dollars in dark money through it. Fun!

On the other hand, in a world of Super PACs and Citizens United, why bother? They can already do this easily enough, just as churches can set up “action committees” that are legally separate and can endorse away.

I’d genuinely like to hear more about this. Within whatever framework of campaign finance law we happen to have, is there any special reason that nonprofits shouldn’t be able to endorse, organize, and spend money on behalf of a candidate? I have to admit that no really good reason comes to mind. Am I missing something?