I’ve been bemused for a while by the support for Donald Trump among hard-core anti-immigrant pundits. Mainly this is because I wonder why they think he’s serious about his wall. Pretty much everything he says and does is a con job of one kind or another, and there’s no real reason to think he’d stick to his guns about the wall if he became president. Instead, since he doesn’t actually care one way or the other about this, he’d probably cut a deal with Paul Ryan for some kind of comprehensive immigration reform—and it would have a far better chance of actually passing than it would if Hillary Clinton proposed it. For the anti-immigrant dead-enders, Trump is likely to be the worst possible choice.

More recently, though, I’ve also begun to think that Trump will be bad for the anti-immigrant crowd even if he loses. For starters, it’s never good to have your signature policy associated with a loser. More to the point, though, we all know that public support for specific policies depends a lot on who they come from. 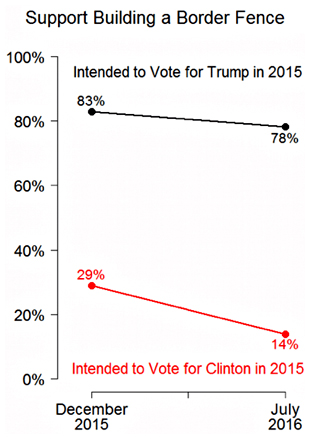 Michael Tesler reports that this is exactly what’s happened:

A number of studies have found that Trump performed best in the primaries among the most anti-immigrant Republicans. But now, in the middle of the general election campaign, Trump is easily the most unpopular major party nominee in modern times. And his historic unpopularity may have also eroded support for the border wall.

The Pew Research Center gauged support for the border fence before and after June 2015, when Trump announced his candidacy. The percentage supporting the border fence was the exact same in 2007, 2011, and 2015: 46 percent. However, that dropped to 36 percent in March 2016.

In CBS/New York Times polls, public support for “building a wall along the US-Mexico border to try to stop illegal immigration” also dropped….The results from the RAND Corp’s Presidential Election Panel Survey (PEPS) are even more telling….The PEPS data reveal who was particularly likely to shift to opposing the border wall: people who did not like Trump in 2015.

….It appears, then, that Trump’s strong support for the border wall has made this policy considerably less popular with the American public.

Supporting Trump was always a high-risk strategy for supporters of a border wall. They put all their money on snake eyes, and it turns out the dice were not their friends.